Define Pro-Life for Me Again 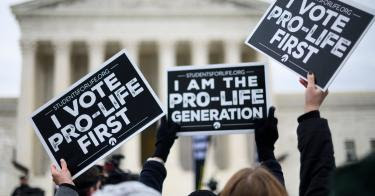 In Texas, abortions are no longer allowed after six week's gestation, or approximately two weeks after a missed period (if regular) might even alert a woman to her pregnancy. Here's the twist - government officials are not going to enforce this new law themselves with criminal penalties. Instead, they are empowering private citizens and telling them to file civil lawsuits against women's health clinics or anyone else who assists in any way in the process of having an abortion after six weeks. You can sue the Uber driver who takes a woman to her doctor. Or you can sue the woman who in confidence encourages her tearful sister who was raped to speak with a medical professional about her options. And these lawsuits can be brought by anyone - by a parent, by a neighbor, by a disgruntled ex-boyfriend, by a stranger. Those who sue will be awarded at least $10,000 plus attorneys' costs if they win.

Oh, if you aren't interested in the attention that would be brought by filing a lawsuit, that's OK. Texas Right to Life has set up a website (www.prolifewhistleblower.com) that you can visit and submit an anonymous tip about a clinic that may be performing abortions after six weeks. That's some next level creepy stuff right there.

In the 1980s, the Kremlin printed out millions of cards and asked police to distribute them in neighborhoods. They read as follows: "We ask you to report, without mentioning your name, all cases known to you of violations of public order, and the rules of socialist communal life, of persons leading an antisocial way of life, failing to work or abusing alcoholic beverages, of problem families, and of adolescents who have given up their studies." People would right down names and phone numbers of alleged offenders as well as the supposed offenses, but would not be asked to write their own names as informants.

Texas is pulling from the playbook of the commies over at the KGB. Cool.

Super late last night, in a cowardly and unsigned statement, five justices of the United States Supreme Court declined to issue a preliminary injunction to stop this Texas law from taking effect, despite the fact that no such restrictions have been allowed under the Constitution in fifty years. They admitted there likely were legitimate concerns about the constitutionality of the Texas law (yep, just a smidge). But they stated that since there haven't been any private citizen lawsuits filed yet, there is no court case to appeal up the court system. The dissenting justices wrote that this late-night move by the majority was an act in defiance of the Constitution and the Court's precedents.

So, in Texas there is now financial gain to be had by harassing doctors and following women into offices, to eavesdrop on conversations and to interrogate your Lyft driver about the woman who just got out of her car. It's serious gestapo authoritarian stuff. And the women who primarily will be affected by this new law are those who are too poor to slide money under the table to get an abortion or to travel to another state where abortion is still legal. The wealthy Texans, including conservative politicians who get their girlfriends or mistresses pregnant, still will get abortions. Guaranteed. Abortions won't end in Texas. This just will end legal abortions for those who are least likely to have the financial means to care for a child. But the Texas legislature doesn't really care about their lives or the lives of their kids once they no longer reside in a uterus, so it's cool.

And this will not stop in Texas. Groups in many other states are salivating and eager to replicate what is happening in Texas. I'm sure that Tennessee's own Republican Congressman Scott DesJarlais, who urged his ex-wife and his mistress to have abortions even though he publicly opposes any access to abortion, will be encouraging his like-minded legislators at the state level to move forward with this "snitch on a stranger for cash" scheme that Texas has devised.

The pro-life groups in Texas are proclaiming a great victory, which highlighted once again for me the travesty that the tag "pro-life" is so inappropriately assigned.

The same legislators who passed the abortion ban are the ones who insisted on standalone, de-regulated infrastructure and utilities that resulted in hundreds of deaths during the ice storm last winter. Not pro-life.

The same governor who signed the abortion ban and declared it a great victory for life is standing in the way of every effort by local school districts to protect their communities during a pandemic. Not pro-life.

The same legislators who passed the abortion ban are the ones who also just changed the law so that in Texas you no longer need a background check, a license, or any training in order to carry a handgun wherever you please. Not pro-life. (You think this is fine, then please tell the kids' minister at your church that you don't think she needs to bother doing any more background checks on the people she hires to handle childcare of preschoolers during service. I'm sure they are all fine and pose no danger.)

The same churches in my area who stand outside women's health clinics (and I won't call them abortion clinics - I regularly used Planned Parenthood for my healthcare when I lived in Boston and never had an abortion) are the same ones who have ignored the pandemic that has killed nearly 650,000 people in our country. They gather into crowded sanctuaries without masks and without advocacy for vaccines, even when prominent members of their own congregation die from the virus (although no one will admit any in their congregation ever dies from the virus). Not pro-life.

OK, and yes, I did tell my children that churches in our area that gather together in large numbers in tight quarters with no mitigation efforts while our state ranks number one in the country for new cases of Covid (Tennessee would be number two in the whole world if we were our own country) do not care about them and do not exhibit Christ's call to love our neighbors and are most definitely not pro-life.

Is "pro-life" as it's generally understood in our country today really nothing more than "pro-making sure every conception in a woman's womb grows without impediment and exits the vaginal cavity or by Cesarean section but then that's it"?

Are you pro-life when you show up to school board meetings and scream about masks that could protect an unvaccinated child or a teacher who has asthma or finished cancer treatments last year?

Are you pro-life when you stand against a vaccine that is safe and proven to lower the community spread of a deadly virus, and in doing so endangering the lives of neighbors whom you are called to love?

Are you pro-life when you tell visitors who come to your church that they are not allowed to stay and worship with you if they wear masks?

Are you pro-life when you silently plead for the light to turn green because the homeless mom standing outside your window asking for spare change makes you uncomfortable all while telling your kids in the backseat that the woman should have made better choices?

Are you pro-life when you weep for the women and children who are starving and abandoned and tortured in other countries but fight against the idea of welcoming them to the freedoms offered in our country?

Are you pro-life when you cut funding for education and preventative health clinics that give women the knowledge to avoid unwanted pregnancies?

Are you pro-life when you don't value the importance of quality childcare or job training programs or extended maternity leave or other resources that put parents in a better position to care for their kids?

Are you pro-life when you dismiss a presidential candidate's claims to kiss women whenever he wants without asking and his proclivity to grab them by the pussy as "locker room talk" or just an example of "boys will be boys" but then act surprised when a boy from your son's fraternity rapes another student and she ends up pregnant? He seemed like such a nice boy.

Advocate against legal abortion. Sure. That's your right in this country. I understand why you do it. I think abortion is heartbreaking and difficult and layered with so much history in economic and racial injustices. But for me, snitching on a scared neighbor like an amateur Dog the Bounty Hunter while ignoring or even mocking countless other opportunities to love your neighbors because those acts are inconvenient or because those acts don't align with the stance required by your political ideology doesn't earn you the label of "pro-life."