Pro-Life or Pro-Death? It's So Hard to Tell! 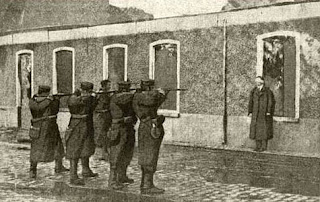 This morning, Texas Governor Greg Abbott signed into law a measure that would make abortion illegal in the state after six weeks and also allow for civil lawsuits to be brought against anyone who assists in the abortion process (those who drive a woman to a clinic, doctors, anyone who contributes to Planned Parenthood, and so on). Abbott was very pleased with the passage of this law and offered up the hashtag "#prolife" on social media to celebrate.

You may be thinking what I've been thinking all afternoon - Texas is having a very confusing day. Pro-life at sunrise, pro-death by sundown.

Governor Abbott's crusade against abortion is founded in his Christian faith. He believes that all life is precious. He has declared a "Sanctity of Human Life Day" in Texas. He has said, "I will always fight for life as your governor." Just today at the bill signing, Abbott declared, "Our Creator endowed us with the right to life."

With Governor Abbott's theological pro-life stance in mind, let me tell you a little about condemned prisoner Quintin Jones. He admits to killing his great aunt in 1999 in an effort to get money from her, when he was nineteen years old and under the influence of drugs and alcohol. For the past two decades, he has been the model prisoner without a single disciplinary infraction. He has gotten clean. His family, and therefore also his great-aunt's family, is appealing to Governor Abbott for clemency. The actual surviving victims of this crime do not want the ultimate punishment to be carried out. But clemency will not come. despite the fact that extending grace and the notion of being made new again are both pretty important parts of the faith that led the same governor to sign the abortion bill this morning.

Today's bipolar activity in Texas is just another piece in a bizarre week for any consistent message regarding sanctity of life in our country. On Monday, the Supreme Court agreed to hear a Mississippi law that outlaws abortions after fifteen weeks. (Texas responded, "Fifteen weeks? Please. That's nothing. Hold my beer. No, really, hold it because I don't want anyone around me to know I drink alcohol.") It has been the goal of conservative state legislatures to pass extreme laws that climb all the way to the Supreme Court to challenge Roe v. Wade and one of them finally succeeded.

But on that same day, "pro-life" Governor Henry McMaster of South Carolina signed a bill forcing death row inmates to choose a firing squad or the electric chair for their executions. Firing squad or electric chair. In a supposedly advanced country. In 2021. I'm not sure how the push for burning at the stake or stoning didn't make the cut as well. Did anyone see this news story this week and wonder if perhaps they didn't take a trip in a DeLorean and somehow forgot?

It's grotesque that the death penalty finds some of its most ardent supporters in the same states where the pro-life abortion agenda is fought the most fiercely. One in nine prisoners on death row is eventually exonerated, sometimes after spending decades behind bars or even already killed by the state. The notion of one person being put to death for a crime he did not commit is horrifying. It is one sentence that is irreversible.

These days, I'm struggling to figure out what someone means when they claim to be pro-life. Did he pray outside abortion clinics all through this past year but then also attend a packed worship service without a mask every Sunday? That's not consistently pro-life. Did she applaud the previous president's Supreme Court nominations because justices who will restrict abortions are important to her but then also cheer when Oklahoma and Florida passed laws granting immunity for people who drive over protestors and perhaps kill them? That's not consistently pro-life. (And in Florida, "rioters" who you can run over with your motor vehicle are defined as a gathering of three of more people. Seriously.)

Put aside the other important and true arguments against the death penalty - it's more expensive than keeping someone in prison, it's not an effective deterrent, the sentencing is hugely skewed to the poor and the non-white. If you are pro-life, if you are a Christian and therefore have read past the vengeful justice of the Old Testament, if you do not believe it is a human's place to serve as final executioner of another man who was made in the image of God, then I think what is happening in Texas tonight and what was decided in South Carolina this week should be troubling to you.

"With every cell of my being and with every fiber of my memory, I oppose the death penalty in all forms. I do not believe that any civilized society should be at the service of death. I don't think it's human to become an agent of the angel of death." - Elie Wiesel, writer, speaker, Holocaust survivor

"Perhaps the bleakest fact of all is that the death penalty is imposed not only in a freakish and discriminatory manner, but also in some cases upon defendants who are actually innocent." - former Supreme Court Justice William Brennan

"Capital punishment is against the better judgment of modern criminology and, above all, against the highest expression of love in the nature of God." - Rev. Martin Luther King, Jr.