Hear No Evil, See No Evil, Turn Your Back on the Republic 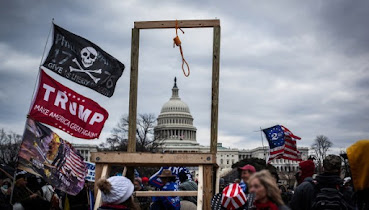 This week, the House of Representatives voted in favor of creating a commission to investigate the January 6 attack on the US Capitol. Every Democrat backed the idea, but only 35 Republicans did the same. That means that 178 Republicans don't want to learn any more about how and why hundreds of people broke into the building that houses the core values of our democratic republic, stole documents and other items, smeared feces on the walls, injured dozens of police officers, threatened to hang our then-Vice President, and hunted down senators after erecting a noose outside.

If some members actually believe that the insurrectionists were members of Antifa and/or Black Lives Matter who changed into Trump shirts and waved Trump flags as a clever disguise, you would think they would want to learn more. Let's hold the correct people responsible and bring to light their crimes against our country! But the truth is, the Republicans who voted against the commission, at least most of them, know that the Antifa conspiracy theory is not a true one. Keeping some shred of credibility to the theory, however, benefits many of these House members in their home districts. So they don't challenge it.

Perhaps there a few members of Congress who worry about being implicated themselves in the day's events. What exactly was said in the phone call between former President Trump and Rep. Kevin McCarthy once the Capitol had been invaded? How did some of the insurrectionists know the exact location of Speaker Pelosi's office? Why did Rep. Paul Gosar tell Trump supporters that it actually was the Democrats who were planning a coup and they needed to "be ready to defend the Constitution and the White House." (Which is ironic, as the insurrectionists themselves were a violent affront to the principles of the Constitution.)

Sadly, though, it seems the primary reason that so many Republicans have abandoned their country and the search for answers is self-preservation and their fear that one man could destroy them. Trump does not want any more time spent studying the mob that was comprised of "very special people" who he "loves very much." He does not want people to keep making connections between the MONTHS he spent telling supporters that the only way he could lose is if the other side stole the election. He does not want people to think about how he spent every day in the weeks leading up to January 6 telling crowds how disappointed he would be if Pence didn't have the courage to "do the right thing" and that those who listened then cried out to "Hang Mike Pence!" Trump is deeply embedded in a tunnel of disinformation that has him convinced he was cheated out of reelection and anyone who disagrees is a traitor.

And Republicans cannot afford to have Trump think they are traitors. His name and his endorsement, sadly, still matter. This is why Cruz still grovels for his acceptance even though Trump called his wife ugly and claimed his father was involved in Kennedy's murder. It's why Rep. Andrew Clyde (R-GA)  said, "You know, if you didn't know the TV footage was a video from January the 6th, you would actually think it was a normal tourist visit." It's why Rep. Thomas Massie (R-KY) said, "I didn't see any violence." It's why Rep. Paul Gosar (R-AZ) said that the Justice Department is now "harassing peaceful patriots" in its attempt to hold the insurrectionists accountable. They cannot risk contradicting Trump's delusions. The political stakes are too high.

In their attempts to whitewash history, to insist that the country needs to move on and forget about what happened in and around the US Capitol on January 6, the 178 Republicans in the House who voted against the commission (including my Rep. John Rose and every other Republican congressperson from Tennessee) have turned their backs on our republic. They have stated with their votes that winning a primary in 2022 is more important than the truth and more important than understanding how some of our elected officials came within minutes or even seconds of violence at the hands of a mob. It's more important than admitting that this very real threat to our country still exists and we need to know how to stop it from happening again.

Next week, we will learn if the Republicans in the Senate have the same priorities. Spoiler alert - they do. There will not be enough Republican senators who will be willing to back this commission and we never will get the bipartisan commission that our republic, our Capitol police, our freedoms, and our elected officials who were threatened that day deserve.

In November 2002, Congress created the National Commission on Terrorist Attacks Upon the United States in order to investigate how the horrific events of 9/11 were able to happen on our soil. The commission was comprised of five Republicans and five Democrats, just as the January 6 commission proposes to do. There was not an overwhelming number of members from one party who opposed learning more about 9/11. In fact, pretty much everyone thought it was a good idea. Our country had been attacked and we demanded answers. While the death toll and the psychological toll on our nation certainly was greater on that awful day in 2001 than what we experienced at the Capitol earlier this year, the attack on our country was just as real and the threat to the vitality of our republic is greater now than it was nearly two decades ago. And the problem should not be ignored just to pacify one man who couldn't care less if the whole place burns.