Church and the Classroom and the Constitution 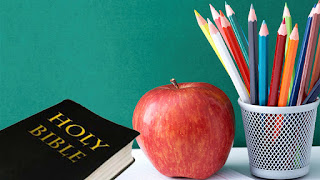 When I taught at a high school in the same town where I now live in Tennessee, the social studies teacher across the hall from me had a wooden lectern at the front of his classroom and on that lectern sat a large Bible. He would start every class reading Scripture to his students and then giving a five-minute sermon before moving to the social studies lesson for the day.

At first, I didn't say anything. I was new to the school, new to Tennessee. I was young and didn't look much different than the high school seniors I was teaching. I sometimes got stopped and asked for my hall pass by school security or other teachers who didn't know me. I was lacking gravitas and afraid to ruffle feathers. But before long, I decided that I could not in good conscience teach the Constitution in my room while that was going on right next to me.

I asked the teacher about this daily ritual he had with his students and he told me this was a Christian town and no one had a problem with it. I then went to the principal, who said to me, "Well, you just like to cause problems, don't you?" Despite this chastisement, I insisted it needed to stop. Before long, both that other teacher and some of the students were referring to me as the "damn Yankee teacher." (To which I responded that Maryland never officially chose a side in the Civil War but that history lesson did not help to persuade people to my cause.) As a government teacher with a room of seventeen-year-old students in front of me, I wanted them to see the relevance that a document that was written more than two centuries ago had on their daily lives and challenge them to think about its application from perspectives other than their own. (Just as I previously had challenged my students back in Maryland when they insisted there was no way that Lincoln could have freed the slaves because he was a Republican.)

More than a decade later, I was now a parent in the same school system and my daughter's elementary school chorus concert was scheduled to take place in a Baptist church down the street from the school building. That was fine, as church facilities often are used for all sorts of community events. But then, the pastor of this church led all assembled guests in a Christian prayer before the concert started. Not OK. I mumbled under my breath not as quietly as I intended, "This is a public school. Does no one else have a problem with this?" I once again spoke with the school principal, who told me that we were guests of the church and the host had a right to welcome us. When I continued to express my concern to others in the community, people told me how sad they were for me and that they would pray for me.

In the midst of both of these episodes, I was attending church regularly and participating in Bible studies and engaged in an active prayer life. My objections to what was happening in our schools was not out of a desire to stop students from hearing the Bible or words of prayer, but it was because of my passion for our Constitution and the freedoms both for and from religion that it is supposed to afford for all. I mean, the search for religious liberty was a pretty big reason that this country got started in the first place. And guess what? With church membership under fifty percent for the first time in our nation's history, the Constitution is the same document that will continue to protect Christians in their worship and evangelism.

These past incidents were on my mind this morning because I still worry that many powerful voices in our communities, from elected officials to school administrators to civic and religious leaders, don't do enough to protect the minority viewpoints, which is the most important reason the First Amendment exists.

I imagine there are those who would assert that people just should move away if they don't like the integration of the Bible and prayer into the local public school system. It's the old "love it or leave it" approach, which I've always found to be one of the most un-American phrases there is. American history and progress and leadership almost always has been built on agitating and pushing and questioning the status quo. After all, we are still and always striving to be a "more perfect Union." And I love my home and my neighbors and my friends, including the Christians and Hindus and Muslims and atheists who live on and around my block and whose kids sit in class with my children.

When we really value the Constitution and our founding principles, we need to remember that our most ardent calls to protect freedoms must come in defense of those with whom we disagree. It does not matter if 90% of those around us hold the same beliefs and are comfortable with whatever may be occurring. Because someday, you might need those marginalized individuals who you once dismissed as holding a minority opinion to protect and fight for you.

"In republics, the great danger is, that the majority may not sufficiently respect the rights of the minority," - James Madison, author of the Bill of Rights, spoken at the Virginia Convention in 1829