My Anxiety Captured in Right Field 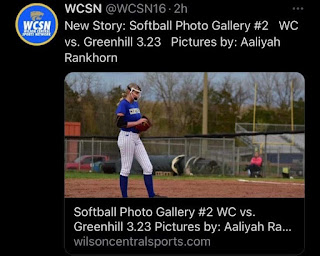 Earlier this week, a local Twitter account inadvertently captured my current state of anxiety in a photograph. Do you see that figure in a pink sweatshirt sitting alone with arms crossed? Having a bit of a Bernie Sanders moment? That's me. Sitting by myself out behind the right field fence during my daughter's high school softball game. (And I must state that my arms and legs were twisted up like a pretzel because it was super cold that night, not because I was irritated.)

The truth is, I've long enjoyed sitting by myself or at least away from the crowd of parents at my kids' games. I like the quiet. I like just to focus on the game. (OK, sometimes I read a book AND watch.) I get uncomfortable when adults yell at umpires or get too intense over a certain play. But I also get uncomfortable with a lot of enthusiastic cheering. I know that seems silly, but my introvert game is strong in these environments. And, sports is so much more a THING here than where I grew up. Heck, I was on the tennis team in high school and my parents didn't come to a single match. I don't remember any other parents being there, either. I don't think it occurred to us that they were supposed to come.

So, over the years, I just got more inclined to carving out my own little spot to watch games. Sometimes I will be joined by a couple other parents, but I am almost always away from the crowd. My kids always know where I am and I absolutely love seeing them play.

But something changed over the past year and intensified my desire to sit apart and alone. My underlying anxiety that has given me stomach pain since high school and has my jaw often aching from being clenched and that sometimes causes chest pains and unusual EKGs found itself operating on a whole new level once COVID hit. Being around a bunch of people while a easily communicable disease runs rampant? Makes me anxious. And that was compounded by the fact that I spent months separated from any other adults and now only my only regular adult interaction is with my four co-workers and we even stay in our own offices unless we have masks on. This isolation, I see now, has made a lot of "normal" human interaction challenging. I feel like I've forgotten how to do it.

The problem is, though, that I look at this photo and realize people are not automatically going to see a woman and a mom who is struggling with her own anxieties and with other stuff in her personal world right now about which barely anyone knows. They see someone who looks standoffish and unfriendly. And that's not who I want to be.

My daughter has another game tonight. And I've decided that I'm going to leave my spot in the outfield. I'm going to come closer to the community of other parents, who are lovely people with whom I want to build better relationships. Now don't get me wrong, I'm still going to keep some distance because this pandemic isn't over. But I will be in the general vicinity. Truth be told, I've been anxious for the past two days thinking about it. I know that probably seems weird to some others - days of anxiety just thinking about sitting in or near bleachers during a softball game. But, that's my truth right now. I actually sat in the bleachers for the JV game on the same night the photo above was taken and I could not wait to break out. I kept looking around for exits. Not a super relaxed way to enjoy a ball game. I don't want to feel that way.

If you have found yourself struggling in new ways since the pandemic started, or if your old struggles have been exacerbated by this environment, you are far from alone. As a doctor told me a couple of weeks ago, medical professionals are going to be writing journal articles for decades about the mental health impact of this past year. I want to be open about my own anxiety so that perhaps I can put a little more grace in the world out there for myself and others, and also so that I can motivate myself to face it and push through some of the discomfort.