When It's All My Daughter Knows

I have a confession. Before I voted for Joe Biden in November 2020, the last time I voted for a Democrat to be president was in 1996. It's hard to admit that in the environment of 2021, considering what the Republican Party has become. I feel no connection to a party that now ignores rule of law and mocks science and gives oxygen to conspiracy theories and lies and wants to tear us apart. The Republicans I voted for at one time barely resemble whatever it is that the party is now. And that is difficult to explain to my daughter. (I haven't even told her that I once met Sean Hannity. I think I've tried to block that moment out because that's just gross.)

My fifteen-year-old equates voting for a Republican with endorsing Trump. And her perspective is understandable. Trump became president when she was ten years old, which is right around the age when I started gaining a real interest in politics. Trump is really all she knows in any meaningful way of leadership in the Oval Office and of Republicans. And that's unfortunate.

I tell my daughter that for most of my life, Democrats and Republicans have been able to disagree on the size of the social safety net or our responsibilities abroad or the definitions of crimes and punishments, but that these were policy discussions that took place inside the assumption that all participants valued our republic and had its best interests at heart. I tell her that policy differences and debates are a good thing and they have helped our country evolve and become stronger over the past 200+ years. But healthy debate and a preeminent emphasis on the Constitution and a belief in the innate goodness of people - none of that existed during the Trump administration. There has been no example for my kids to witness.

I try to explain to her that Trump is not a Republican by traditional definition. I tell her that former national Republican leaders like Reagan and Bush and McCain and state leaders here in Tennessee like Thompson and Frist and Corker were nothing like what Trump and his adherents represent now. I tell her that there are many others like me who voted for Republicans in the past but who are greatly troubled by what the GOP has become. I'm friends with many fellow voters who don't recognize the party we once, at least sometimes, found cause to support - and we lament together often!

I want my daughter to know that I voted for Republicans or Libertarians to be president because that is what my reading of the Constitution and my understanding of our nation's structure prescribed. Small and limited government in DC with state and local officials making their own decisions about the role that government should play in healthcare, education, the arts, infrastructure, wealth redistribution, and so on. That's federalism, after all.

I also want my daughter to know that the disintegration of the Republican Party into what we see today started when she was a toddler with a woman named Sarah Palin. Palin's nomination was a move that John McCain did not want and I believe always regretted. Palin fed an undercurrent of fear and anger that existed in the souls of many in our country and that finally was brought out of hiding. Palin ushered in the Tea Party who then laid out the red carpet for Trump. In all instances, in that continuum from Palin to Trump, the bend was towards authoritarianism and dismantling of a free republic in the name of "patriotism," which always has been so disturbing and sad to me. Many Republicans discovered that playing to our worst instincts was an effective way to get elected and gain power and now we have representatives like Matt Gaetz and Jim Jordan and Marjorie Taylor Greene to prove it. I explain all of this to my daughter.

Now, I need my daughter to know, the only way I ever will vote for a Republican candidate again is if he or she has disavowed Trump and all the damage he tried to inflict on our Constitution and our freedoms. Such politicians are out there, but sadly their numbers are not large. The work that politicians like Rep. Adam Kinzinger in Pennsylvania and Governor Larry Hogan in Maryland are doing to rehabilitate the Republican Party is important. But only time will tell if it bears any fruit. I'm not betting on it. At least not when half of the GOP caucus just yesterday gave a standing ovation to an anti-Semite who believes school shootings are staged and that Muslims shouldn't be allowed to serve in Congress.

President Biden isn't awesome. He's not the great political savior for our country. But if nothing else, I'm hoping that his term in office will offer my kids a sense of what it can be like to have valid policy disagreements that don't devolve into name calling. That they can see two parties with fundamental differences but with members who want to compromise. I dream that my kids can see political relationships like the one between Tip O'Neill and Ronald Reagan in the 1980s - the politics that I saw when I was their age. Or maybe, at the very least, they just can appreciate a few years of the machinations in DC being boring again.

Is anyone else out there struggling to convince their children that politics used to be different? Does anyone else get the "Ugh, how could you?" reply if you mention your previous voting decisions, because what that vote means now is different than what it represented twenty or thirty years ago?

Here's a photo of me at age twenty displaying excellent posture (while still wearing my coat for some reason) at my White House internship in the Communications Office. I regret that I am wearing white nylons. I'm sure there are some juicy Clinton secrets on those post-it notes. It was a year after this that I would cast my last vote for a Democrat to be president until I did so once again several months ago. The fresh-faced college kid you see here believed in the goodness of both political parties. Will my daughter be able to feel the same in five years? 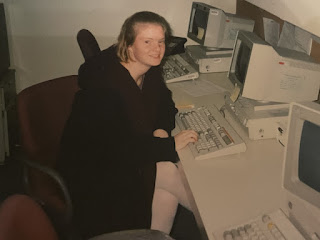