My freshman year of high school, I was not really plugged into what one was supposed to wear to a homecoming dance. So, my mom took me to some store inside Laurel Mall and I picked out a plaid skirt and a black wool cardigan that had trim to match the skirt. When I arrived at the school, I soon realized that my chosen outfit did not align with the general understanding of "semi-formal." So, I spent most of the evening sitting at a hidden table just outside of the cafeteria with my friend who also had dressed much more casually than most of our peers.

You could argue that my friend and I could have been more confident and walked into the cafeteria to enjoy that dance no matter what we were wearing. And, your point would be a valid one. I would hope my own daughter would have marched onto that tiled floor, started dancing to "Miss You Much" by Janet Jackson, and within a half hour have everyone there convinced that they should have worn a cardigan. But, my friend and I were very shy fourteen-year-old girls who had taken a big swing and miss at our first major social event for high school We chose to lick our adolescent wounds in the shadows while others slow danced to Roxette's "Listen to Your Heart."

The following year, surprisingly undeterred, I asked my mom to take me shopping for homecoming again. This time, I picked out a black velvet number that I knew would make me blend in more on that cafeteria dance floor. And even though it cost more than any any dress worn by a sophomore in high school should, my mom bought it for me. This was unusual, as my mother was not one to encourage spending a lot of money on clothes or other such things. But she must have realized that the dress had more of a meaning for me.

I loved that dress. After stopping with my girlfriends for Frostys at Wendy's, as pictured below, we headed to school and enjoyed Homecoming 1990. I stayed in the cafeteria the whole time. I remember doing the Electric Slide and dancing with a senior to "Humpty Dance." 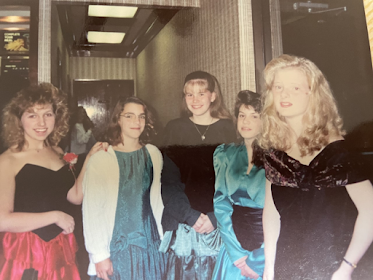 An interesting twist, though, is I never really cared about having a fancy dress again. My junior year, my friends and I opted to dress up in togas and go bowling on homecoming instead of going to the dance. I don't remember what I did senior year. Perhaps another member of the ERHS Class of 1993 can remind me. As for senior prom, I went my junior year because my boyfriend at the time was a senior and my senior year I went with a friend and we hung out in a big group the whole night, Both times, I wore lovely dresses sewn by my mom. Maybe I grew more confident in myself and with my friends and didn't need that expensive black velvet dress anymore.
But I've been thinking about that sophomore year dress a lot this past week. That was an indulgent treat that I still remember as being so special thirty years later. Or the times that my mom drove me to Peoples Drug so I could get the new issues of Teen Beat and Tiger Bear the days they hit the stands. That didn't cost her any money, but it still was indulgent. Or when she surprised me on my walk home from school in first grade with some snacks at a picnic table that I passed every day. (Because in 1981 kids were allowed to walk the mile and a half home by themselves, as it should be.)
My two children have struggled during the pandemic, both in different ways. I don't want to write more about that now, but perhaps will someday when the feelings and the difficulties are not so tender and fresh. But I want to make sure they have some of those memories of indulgences to break up the nearly year-long lack of structure and time with friends and normal kid stuff. It could be the three-mile run I took with my son just to enjoy some new scenery and talk. Or it could be the special decorations I bought for my daughter's room because she spends so much time in there. Or the night we bought a bunch of junk food and slept in the tent in our backyard. Maybe it is spending a bit more money than I would have and surprising my son with a particular hoodie he's been wanting for a long time.
It doesn't need to be a black velvet homecoming dress. But while I do have expectations for my kids' behavior and I never want them to expect a "yes" to their every request, it is fun to surprise and indulge from time to time. Especially during a period when so much has been taken from them.
Posted by Sarah at 1:11 PM