The Greatest Threat to Our Republic 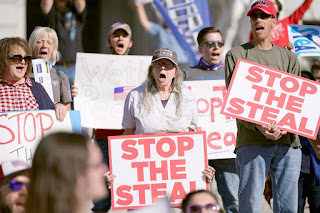 You might think that the greatest threat facing the strength and future of our Republic is China or Russia or maybe Iran. Perhaps it's not a country at all but instead a terrorist organization. These are all reasonable guesses, I suppose. But they are all wrong. As the cop tells Carol Kane in the opening scene of When a Stranger Calls, a movie I certainly should not have been allowed to watch with a babysitter when I was six years old, the call is "coming from inside the house."

When still a young man in 1838, Abraham Lincoln said the following, "At what point then is the approach of danger to be expected? I answer, if it ever reach us, it must spring up amongst us. It cannot come from abroad. If destruction be our lot, we ourselves must be its author and finisher. As a nation of freeman, we must live through all time, or die by suicide."

Today, those who are continuing to peddle the misinformation that President Trump had this election stolen from him and that the very foundations of our democratic voting process cannot be trusted are the ones providing the cyanide tablets to America. We cannot survive if half of our electorate believes we have an illegitimate president. Our nation will die by its own hands.

There are two kinds of people who are promoting this false theory. First, there are the elected officials (Rubio, Blackburn, Paul, Pence, Cruz - the list is embarrassingly long) who know what they are selling is not true but who must speak it loudly in public to save their own political lives. They do not want to become a subject of one of our President's Twitter rants and suddenly find themselves facing a primary challenge from a Trump sycophant. In other words, they are willing to sell their souls to stay in office. It's gross. While not elected officials (yet), I include pundits like Tucker Carlson and Sean Hannity on this list. Coddling Trump's tantrums and appeasing his lies makes for good ratings from the devoted.

The second group is those who have fallen victim to the avalanche of false information that comes storming at all of us through social media and local conservative radio. It takes only hours for absurd YouTube videos or lengthy Facebook rants that have no moorings in reality to be shared hundreds of thousands of times. The truth is, and I admit this is a problem on my part, I wake up in the morning upset about it and I think about it as a walk my dogs or commute to work (when I was actually commuting to work). What is happening - or not happening - in our high school government classes? Where is the critical eye to look at a piece of information and question its veracity? It makes me sad. Every day. How do people living in the same country come to view events through such radically different lenses?

One of the most common refrains you will hear from the conspiracy theorists is they just want every legal vote counted. They want to make sure the election was free and fair. If they can be convinced of this, only then will they accept the notion of a President Biden. But they are being disingenuous. The lawsuit that Texas brought against Pennsylvania (and that was summarily punted by the Supreme Court) and other efforts that are being retweeted by Trump as recently as yesterday focus on the fact that the swing states won by Biden changed election procedures right before voting began. This is true. But what also is true is that more than twenty states changed election procedures at the last minute due to the pandemic. These states include Texas and Oklahoma and North Carolina and Montana. If you claim to be bothered by changes to how we vote, but only claim it selectively when your guy didn't win, then your cries ring hollow. If you are a "patriot" who wants to sue Pennsylvania and Wisconsin, make sure you add Texas and Montana as defendants as well. If you are a Republican congressman who just won reelection in Georgia, you should refuse to take your seat next month because it's so clear that the voting in your state was unfair.

Every other claim - from the large trucks moving ballots across states to the assertion that ballots were tossed in still undisclosed rivers to poll workers changing votes in the middle of the night - has been shot down as nonsense. Every recount done at the taxpayers' expenses or at Trump's expense (which is really at the expense of Trump supporters as he continues to raise money for his legal challenges) has resulted in further affirmation that President-elect Biden won both the popular vote and the electoral college. Were there isolated instances of people voting when or where they shouldn't or a ballot not being processed correctly? Sure. Happens every election. But there is no substantiated evidence that President-elect Biden stole the election. None. There were no large-scale and coordinated shenanigans.

Here's the thing. Just because you don't like a man or his policies, it doesn't mean he cheated. It just means more people liked what he was offering more than what the other guy was selling. I wasn't happy when Trump won in 2016. Heck, I wasn't happy when Obama won before that. Didn't vote for either of them. But I admit in both instances that millions of other people did.

You aren't excited about a Biden administration? You want the policies promoted by Trump to continue? Fine! Stay active in the causes that are important to you. Make sure your elected officials hear your voice. We live in a free country and all of us should take advantage of that to speak up loudly and often. But there is a difference between disagreeing on policy and trashing without merit but based solely on heated emotion the entire system within which the policies are created.

In a study just released today, Vanderbilt University found that only 15% of registered Republicans in the state of Tennessee believe Joe Biden to the legitimate victor in last month's election. Across the country, a strong majority of Trump supporters (who I must clarify are not necessarily the same as Republicans) feel the same. Many still believe Trump will be inaugurated for a second term in January. Many never will accept Biden as the president.

How does a republic survive in these conditions? How do we function as the United States when millions of people believe their fellow countrymen rigged an election? How do we move ahead as a nation when leaders in some states are calling for secession? I don't know. Right now, it looks bleak. We are going to need talented and thoughtful and respectful men and women from across the political spectrum to step up and lead by example in how they talk with one another and work with one another. We are going to need to demand better from ourselves and from others and not just accept information that fits what we want to believe. We need, somehow, to stop making our political system an us versus them blood sport.

Our nation is in danger and I'm convinced that how we proceed over the next next decade will determine its fate. Biden isn't our answer. Neither is Trump. They can't repair the trust in our country that has been broken. But I hope collectively that we can. Somehow. Bit by bit.