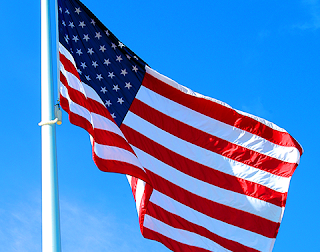 The United States passed away on August 27, 2020, following the official nomination of Donald J. Trump by the Republican National Convention for a second term as president. The death came following a prolonged illness that that took a grim turn on July 16, 2020 upon the nomination of Bernie Sanders to be the presidential candidate put forth by the Democrats. It is believed that the compounding effects of both of these tragic events left the republic without a will to live.

The United States was born on July 4, 1776 in Philadelphia, PA to parents Father Liberty and Mother Equality. It was considered a grand experiment - one in which people of all nationalities and religions and races could participate. In fact, for a time, the United States even earned the nickname "Melting Pot" for the unique way in which its freedoms and opportunities called to people from all walks of life. It will be remembered in history for this characteristic - one that is shared by no other nation.

There is no doubt that the United States experienced some failures and setbacks in its 244 years. In its founding documents, white men who owned land were the only ones who were granted important rights of United States citizenship, like voting and working for pay and generally being treated like a human being (this is, for some, when America was "great" . . . they are wrong about that). But through its growing pains were borne corrections that rightfully moved to offer the promises in the Declaration of Independence to all who lived there. The nation fought difficult internal wars, from  the battlefield and the courtroom to the classroom and the living room, to secure this progress.

Throughout these struggles, the fundamental truths that made the United States worth the pain of fighting for an ever "more perfect Union" were that all people are created equal, that all people are worthy of care and human dignity, and that one's religion or skin color or bank account would not define the success and happiness they should be able to experience.

Before the illness that ultimately took its life, there were other times that the United States seemed on the precipice of death. The Civil War almost ruined her. The Great Depression made people wonder if prosperity was still to be found there. The 1960s made those in the United States question her soul. But in each of those instances, there was a leader, or leaders, who clung to what the United States was meant to be and led everyone out of those grave conditions. With the sickness that took her life this year, there was no leader to be found.

The United States watched helplessly as events of this year took a terminal toll on her health. A quarter of her people supported a man who rose to power by playing on the fears of people who did not want to share the promise of the country and who were scared of change, ignored the Constitution and took on executive might that the United States' founders had been intent on avoiding, silenced all critics even though progress in this country had been made largely from dissent and debate, and treated other people in a way that sullied her beautiful flag by association.

Another quarter of her people supported a man who cried out for Mother Equality but did not care for Father Liberty all that much, when both parents had provided essential components that had kept the United States successful and the envy of other nations for generations. He believed in a philosophy that ran counter to promoting ingenuity and hard work and that in practice only had resulted in great poverty and oppression. He spoke of the virtues of regimes that had harmed and taunted the United States for decades, including those who captured and killed some of her people. He had a personality that was no more inspiring than that of his opponent.

Both men lacked respect for the ideals of the United States and for its people. Both men were two sides of the same power-hungry, ego-driven coin. Neither one would be able to lead the United States to any real greatness.

And, perhaps the truth that finally drained the life out of the United States . . . once all of those supporters of both men had been counted, the remaining half of the people just didn't care at all.

The United States leaves behind so many amazing offspring. They include civil rights leaders and inventors. Architects and writers. Jazz and barbeque. National parks and skyscrapers. Churches and mosques. It is buried with scars from more than two hundred years of fighting to be better and learning from its mistakes. It is buried with The Federalist Papers and the Constitution and the Emancipation Proclamation and the Gettysburg Address and the text of the 19th Amendment and a poem by Emma Lazarus that held up the Statue of Liberty and the speech made by a King on the steps of the Lincoln Memorial.

In lieu of flowers, those who loved the United States ask that mourners promise to tell their children and grandchildren about the great republic that once brought hope and served as a beacon of light to millions across the globe. They also ask that you engage in acts of kindness among your neighbors and greater community, as we must learn to move ahead together in whatever this land now has become. Maybe we can make an effort to know one another as individuals instead of assigning labels based on differences and isolating ourselves. When we get past the fear that has taken such a deadly grip within the borders of our late nation . . . that has divided us with such hatred . . . and realize we are better and stronger together, the United States just might have a fighting chance to be born again. Someday.