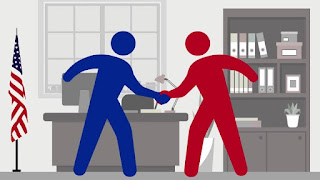 Labor Day 2019 is behind us. A year from now, we will know who our Republican and Democrat nominees will be for president. The spectacle of the nominating conventions will be winding down and our nation will be in its home stretch to elect our next president.

I have voted for Republican and Democrats for president, senator, mayor, state rep, etc. I tend to vote for more conservative candidates at the federal level and more (relatively) liberal candidates at the local level, which I believe to be consistent with an adherence to federalism and keeping power in the states. I have not yet decided how my ballot will look in 2020 when it comes to my presidential selection. Perhaps, like in 2012 and 2016, I will find myself selecting a third-party candidate.

I know I will not vote for President Trump. My love for the Constitution and limited government and freedom and elected officials who have some knowledge of policy will not allow me to do that. Not to mention I'm a fan of diplomacy and basic human decency and rallies that don't make my stomach turn. I don't believe Trump to be a Republican at all, be it of the moderate or conservative variety.

But, I watch the Democrats debate and I cannot see myself voting for most of them, either. We are a capitalist republic with an electoral college and (ideally) power held primarily in the hands of state and local governments. And I like it that way. I'm not comfortable with the fact that the three leading candidates for the Democratic nomination are pushing each other ever more left and they are doing their best to bring the rest of the field with them.

How do you think this leftward push is going to work out for the Democrats come the general election? (Spoiler alert - not so well aka four more years of Trump aka yikes)

One of the more moderate voices who had declared his candidacy, Gov. John Hickenlooper, already has dropped out of the race. Fellow moderate Rep. John Delaney is struggling to get any traction and currently is not poised to make the cut for the debate stage next month. They are voices that need to be heard. In fact, we need to bring moderate voices back to the podium for both parties. Because that is where most Americans are. And that is how, through compromise and actually valuing different opinions and ideas, the best progress in our country is made.

The four most popular governors in our country, as gauged by approval numbers, are Republicans who lead states that went for Hillary Clinton in 2016 and three of those four states are super blue (Massachusetts, Maryland, and Vermont). What does this tell us? We WANT bipartisanship and compromise. We like it when it works.

I do not care if the person for whom I vote is Christian, Jewish, Muslim, atheist, straight, gay, white, black, brown, yellow, male, female, young, middle-aged, or old. I don't really care if that person is labeled a Democrat or Republican or something else, because those affiliations have lost all significant meaning. I do want that person to know why he or she is running for office. I want that person to understand how government works. I want to be assured that whatever demographic or political labels that person uses, the rule of law and other government machinations are used consistently and equitably. I want that person to be curious and want to learn and find value in those around him with different opinions.

We should be able to bring different opinions to the table concerning gun control and abortion and the environment and education and foreign policy and immigration and not have them dismissed by the other side of the aisle because we have become accustomed to drawing party lines and calling out as traitorous those who dare to step over those lines.

I LOVE the Constitution. The number of times I read it every year likely would be found excessive by most. It's a beautiful and lasting document. It was crafted out of compromise by (white, landowning) men who came to the convention with wildly different ideas about how our new country should look. But they listened to each other without automatically defaulting to whatever the late-18th century equivalents of name calling like "RINO" and "libtard" were. And we are a powerful and dynamic and always striving to be "more perfect" nation because of it.

Can you relate to how I'm feeling? Do you believe there is a moderate majority that is being ignored by the media and many of our leading political contenders?
Posted by Sarah at 11:13 AM