Even Sadness is a Reminder to Celebrate 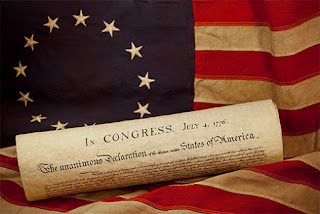 I have a confession. I haven't been very enthusiastic about the idea of celebrating the Fourth of July this year. I told my daughter that I look at the American flag these days and I get sad. I'm sad that we are so polarized and that this division goes beyond arguing over policy but extends into every facet of our lives. I'm sad that words like "bipartisanship" and "moderate" and "compromise" are seen as evil, traitorous words when actually those notions are important cornerstones of our republic. I'm saddened by the person who occupies the Oval Office right now as he runs counter to so much of what makes America great, and also that those who wish to replace him in the election next year are far from inspiring alternatives.

But I realized something this morning over my coffee and my re-reading of the full text of the Declaration of Independence, which I take time to do every year on this holiday - the sadness and the ache that I feel is exactly because I love this country so much. I'm in awe of her origins and her growing pains and her endurance. And what great love doesn't come with a little bit of heartache at some point, right?

I also realized as I reflected on those powerful and shocking words penned by Thomas Jefferson 243 years ago that my love for and celebration of this country does not need to be, and in fact should not be, contingent on how I feel about the politicians we've elected to watch over our bureaucratic machinations. We are so much more than that.

We are farmers and merchants who risked everything to defeat the most powerful military in the world. We are explorers who surveyed a diverse landscape unparalleled on this planet, with its mountain ranges and deserts and oceans and prairies. We are soldiers who fought to end slavery on our soil and to end genocide across the ocean. We are people of color who faced fire hoses and police dogs just to attend schools and sit in restaurants. We are women who participated in hunger strikes because we deserved the right to vote. We are aid workers who will be the first on the scene to provide food and comfort after an earthquake or flood. We are still people who deserved the gift of the Statue of Liberty more than a century ago as we embrace the huddled masses and wretched refuse who are simply yearning to breathe free. We are strangers who hugged each other and stood in lines for hours at blood banks when terrorists attacked us. We are neighbors who look out for one another. We are baseball games and lemonade stands. We are protestors and agitators. We are still all of these things.

And we have faced heated division in this country before. You all remember the election of 1800, right? Adams and Jefferson and their respective supporters were downright nasty to one another, each side convinced the other's ideology would ruin our new country. Years later, these two founding fathers reconciled and both died on July 4, 1826, exactly fifty years after our country was born and extolling the virtues of the other on their deathbeds. That's some intense history right there.

Oh, and there was the time that our country split in two over the notion of slavery (let's not kid ourselves that the motives were anything else). Though a painful process (and seemingly still an incomplete one as some people inexplicably continue to fly confederate flags), our varied states with their diverse economies and demographics and politics managed to come back together as one nation. America came back from THAT horror and, I think, was better as a result.

And how many people who lived through the late 1960s felt that perhaps our nation was at its breaking point, with assassinations of King and Kennedy, protests over the Vietnam War, and a general unrest as the baby boomers reached adulthood and shook up so many of the traditions and institutions held dear by their WWII veteran parents. That was fifty years ago, and we are still here.

I can look at the more than 200-year history of our still young nation and realize that periods of division and hate are nothing new - it's just that before we've always experienced these differences without Facebook and Twitter and misspelled memes filled with false information and this technology is a new and magnified hurdle to overcome.

I can think our president is ridiculous and embarrassing and that the politicized parade of tanks that he has planned for today is counter to what really makes America great. I can think that senators like Lindsey Graham and Ted Cruz are cowards because they once spoke up against Trump but now kiss his feet. I can think that far left politicians like AOC and Elizabeth Warren are dangerous in their desires to make fundamental shifts to our political institutions and economic systems. But I also am thankful that I live in a country in which I openly can say that our president is ridiculous and embarrassing and that legislators are cowards or misguided in their ideology without fear of persecution. The First Amendment is pretty awesome like that.

I can decide it's OK to be a little sad when I look at the flag and know that this ache is borne of a deep love for a nation that has survived difficult times and trials before. I will celebrate that, because love is worth celebrating. And there is still nowhere else I rather would live.

In my celebrations today, I will focus on what really makes America great . . . hardly perfect, but great. There are other countries in the world in which people live free. We are not alone there. But, America has been tasked with being a beacon of freedom and cooperation and civility with a population intentionally constructed as a beautiful melting pot of different ideas and experiences. The fact that we endure and do our best to learn and improve through all of the restlessness that can occur when people who do not share the same skin color or religion or culture occupy the same space is what sets us apart. The fact that our flag is there for ALL of us, along with the freedoms and protections it symbolizes, whether or not we agree at any given time with what is being done in its name is special and important.

Within walking distance of my home, right in my neighborhood, there are Christians and atheists and Hindus and Muslims. There are those who are "red and yellow, black and white." There are stay-at-home moms and working two jobs moms and lesbian moms. There are Democrats and Republicans and those without a political home (hand raised here) and those who are apathetic. There are active service members and veterans. There are families who send their kids to public school, to private school, and who teach their kids at home. Any of these various labels have the potential to cause division, and often do. Today, however, we will play at the park together and swim together and watch fireworks together. Maybe we will enjoy conversations over burgers and beers. It is during those everyday moments between neighbors, in which we decide to be invested in one another and know we are more than what happens in DC, that America shines its brightest.

We mutually pledge to each other our Lives, our Fortunes, and our sacred Honor. - TJ, July 1776

Happy birthday, America! I love you so much!
Posted by Sarah at 8:04 AM