The Comfort of the White, Christian Moderate 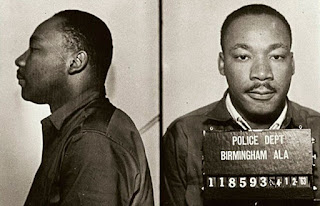 There are many amazing quotes from Dr. Martin Luther King, Jr. that have been posted across social media today. This is good, as all of Dr. King's words warrant attention and reflection.

I wonder, though, how many people are sharing his words today but also just recently condemned those who chose to kneel in silent protest at the start of football games? How many deemed these athletes as "ungrateful" or "disrespectful" before taking the time to listen to why they were kneeling? I'm not even stating that everyone had to reach the same conclusion after the conversation - it's a complicated situation - but how many really listened or tried to see the protest from a different perspective before issuing a verdict?

How many want to believe that this country's "real" racial problems are behind us and that we are all hanging out at an equal spot along life's starting line now and that those who proclaim otherwise are just making excuses?

How many of us today are the "white moderates" who frustrated King and whom he considered the biggest impediment to progress?

I heard a white radio talk show host today say that Dr. King would be outraged by the protests and the demonstrations that are taking place these days. He said that Dr. King would not recognize the racial justice movement of today as something in which he ever would take part. Really? I'm not so sure.

I have not, today, seen many people share excerpts from a letter that Dr. King wrote while detained in a Birmingham jail, dated April 16, 1963. I want to share a lengthy portion of it here, while also recommending you read the entire letter.

I must confess that over the past few years I have been gravely disappointed with the white moderate. I have almost reached the regrettable conclusion that the Negro's great stumbling block in his stride toward freedom is not the White Citizen's Counciler or the Ku Klux Klanner, but the white moderate, who is more devoted to "order" than to justice; who prefers a negative peace which is the absence of tension to a positive peace which is the presence of justice; who constantly says: "I agree with you in the goal you seek, but I cannot agree with your methods of direct action"; who paternalistically believes he can set the timetable for another man's freedom; who lives by a mythical concept of time and who constantly advises the Negro to wait for a "more convenient season." Shallow understanding from people of good will is more frustrating than absolute misunderstanding from people of ill will. Lukewarm acceptance is much more bewildering than outright rejection.

I had hoped that the white moderate would see this need. Perhaps I was too optimistic; perhaps I expected too much. I suppose I should have realized that few members of the oppressor race can understand the deep groans and passionate yearnings of the oppressed race, and still fewer have the vision to see that injustice must be rooted out by strong, persistent and determined action.

There was a time when the church was very powerful--in the time when the early Christians rejoiced at being deemed worthy to suffer for what they believed. In those days the church was not merely a thermometer that recorded the ideas and principles of popular opinion; it was a thermostat that transformed the mores of society. Whenever the early Christians entered a town, the people in power became disturbed and immediately sought to convict the Christians for being "disturbers of the peace" and "outside agitators."

The same talk show host who I mentioned above also shared his love for Dr. King today because King's marches were always "respectful" and "done the right way." By that, I believe this host is meaning to say that Dr. King didn't seem to push things too far. He respected the boundaries of proper protest behavior. He followed "the rules" of how the oppressed were supposed to call for justice.

But, here's the thing. Dr. King didn't operate with the approval and embrace that this talk show host and the rest of us learned in school. Dr. King was vilified. He was told to be quieter by many of those who claimed to support his efforts, though thankfully he did not listen to such requests. He called out whites as being "the oppressor race." He put a mirror in front of the church establishment and told its members that they are failing the call of Jesus!

How do King's words strike me half a century later?

I am guilty on all counts of my own complacency.

I place myself at the front of the line of those who fall short. I know Dr. King is calling me out more than fifty years later from that prison cell, much as Paul called out the early Christians from his own shackles over 2,000 years ago. I am not always willing the be an agitator when I see or hear injustice on my own block or on my television screen. I don't want to be uncomfortable when confronted with my own biases.

I am going to read Dr. King's letter a few more times this evening. And then I need to read more from others whose voices aren't as prolific as that of King. And I want to be able to admit when I don't understand or I don't agree. And I won't always agree with those I read or to whom I listen, but I need to stand in that conclusion as well. I want to WANT to be more uncomfortable. I am really reading this letter with conviction for the first time this year and now it's up to me to do something with it.
Posted by Sarah at 8:24 PM