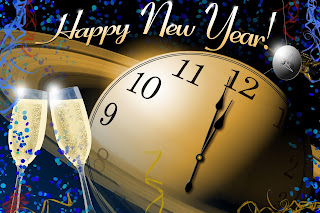 It really is true that each year seems to go by faster than the last. Before this millennium leaves its teenage years behind, I thought I would take a few minutes to reflect on the past twelve months.

I think I did a pretty good job keeping my resolutions for the year. I'm finally getting seven hours of sleep consistently for the first time in my adult life. Forcing myself to bed at a reasonable hour and keeping my phone out of my room helped with that. I finished a half marathon in April in just under two hours and completed my first (and probably only!) full marathon in September. There may have been 3672 people who finished in front of me, but I finished! The side effect of eating clean and my regular exercise and getting good sleep meant I got rid of those extra twenty pounds that slowly have crept onto my body over the past fifteen years. I'm excited to report that I'm forty-four years old and feel stronger than ever!

Catherine and I enjoyed a fun mother-daughter trip to Chicago in February to celebrate her entrance into the teenage years. It was the first visit to that city for both of us. I only have a few more years with her in our home and the time is going by so quickly. I'm thankful that we had a couple of days to talk and laugh together. And I'm thankful for great friends who took care of my boy (who entered double digits this summer!) while we were gone.

Speaking of travel, our trip to New York City and Boston over fall break was one to remember! The kids finally got to meet their new cousin, who is beautiful and amazing, and then we rented a car and headed up to Boston for a couple of days, which was necessary because I challenge you to name a more beautiful place than New England in October! I showed them my old apartment and we even took bus #57 that I rode to work at BU every day. I love Nashville, but there always will be a part of me drawn back to the history and the seasons and the people of Boston and the too brief time that I lived there.

The Terps shocked everyone with their dominating run through March Madness this spring, beating Tennessee by a convincing margin in the finals! And even I didn't expect for the football team to follow that up with a one-loss season (thanks, Rutgers) and a Big Ten championship. Fear the turtle, indeed!

I've read a lot this year, which was another goal of mine. I turned off the political talk shows and opted for audiobooks during my commute. I now always have a book in my purse so I'm not tempted to scroll mindlessly through my phone while in line somewhere. And, ending my night with a few minutes of reading in bed instead of dragging myself off the couch after staring at the television too long has helped with the aforementioned sleep improvement.

While I haven't accomplished quite as much with my writing as I had hoped, I did make a lot of progress on two book manuscripts - one about the silent majority of political moderates and how we need to use our voices to bring civility and compromise back to government and the other one a "devotional for doubters." For years, I wanted to read from those who struggled with the Bible and tried to reconcile the seeming theological contradictions but who also felt the call and desire for faith. So, I finally decided to write what I wanted to read. (And shout out to writers like Anne Lamott and Nadia Bolz Weber whose books about their faith journeys changed my life over the past couple of years.)

On the topic of faith, after feeling distant from God for several years, I'm so thankful that 2019 brought a renewed relationship with Him. Making it a priority to spend every morning in silent meditation, reading books that challenged and pushed my understanding of theology, and reaching out for conversation with others who have felt that so much of what they see of Christianity does not align with Christ's love and teaching has been an amazing growth experience for me.

I'm proud of myself for being more social in 2019! My daughter made me promise to "get myself out there and meet more people." That's hard to do when you have full custody of two children, but I finally admitted that perhaps I had been hiding behind my kids a bit. Catherine and Ian are older now, and actually are happy for me to leave the house. It's scary to be single and in your mid-40s and an admitted introvert, but I also knew I needed to expand my circle of already amazing friends. So, starting with a group jog around the lake on New Year's Day with a local running group and then saying "yes" to events with some new social groups even if I didn't know anyone, 2019 has been a great year for meeting people.

I'm excited to see what 2020 brings! We get to elect a new president . . . finally! I'm so glad that Governor Larry Hogan (R-MD) stepped forward to challenge Trump in the primary and I look forward to working hard on his campaign. Catherine will be starting high school and Ian will be starting middle school in 2020. That's nuts. I will have to renew my driver's license and I actually really like the photo I got for my license in 2015 so I hope I can use it again.

Well, I guess I will sign off here. One of those people I met this year just let me know that dinner is ready. The kids have been helping him in the kitchen for the past hour. After a decade of being single, I am happy to report that being in a relationship again has been better and a more seamless transition than I hoped. We just fit. I finally know what it's like to have a partner and the kids are thrilled to have a man around who they trust and who loves them like his own. (OK, my son wanted to beat him up for the first month or two, but he has come around and now adores him.) While I usually was just fine being on my own, I will admit there were times I wondered why so many of my friends were able to find new relationships while I continued to remain single. Now I know that every moment was worth the wait and my family is right where it is supposed to be.

Here's to an amazing 2020 filled with love and kindness and community!
Posted by Sarah at 5:49 PM