Donald Trump is Not a Nationalist 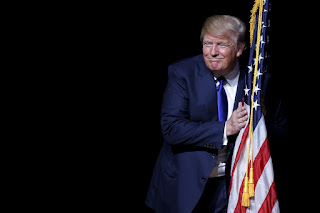 I want my president to love America. I love this country! There are plenty of places around the world where I could not vote or decide who to marry (or later divorce if circumstances warrant that difficult decision) or get an education or work just because I'm a woman. There are countries in which violence and poverty are all a majority of its citizens have ever known.

We also have mountains and oceans and farms and swamps and snow and heat and deserts. That's amazing. We have people from all over the world who long to live within our borders for the freedoms and the opportunities we provide. That's really amazing. Oh, and the Constitution? Most people who have known me for a minute know how I feel about that document. ALL the warm and fuzzy feelings of love.

And we have football. Not the kind during which the athletes primarily use their feet and the rest of the world really enjoys, but the kind that involves nachos and an overzealous protection of the quarterback and the screen on my television every weekend in autumn.

So, yes, I want the occupant of the White House to think this place is amazing (while also acknowledging that we always are striving to be a "more perfect Union" and we haven't hit the mark yet).

To that end, President Trump recently has proclaimed at rallies that he is a proud "nationalist," which is met with raucous approval from those in attendance. Merriam-Webster defines a nationalist as someone who subscribes to "nationalism," and nationalism is defined as "loyalty and devotion to a nation; exalting one nation above all others and placing primary emphasis on promotion of its culture and interests." Fair enough. It's a solid argument to say our leaders should be loyal to our nation and promote its interests above those of other countries.

Critics have derided Trump's embrace of this word, though, as it has come to be associated with notions of nativism and a sense of superiority over other cultures and nations. It eludes to the concept of walling our nation off and just looking out for ourselves. It pits us versus them and insinuates that we are better than our fellow men and women around the globe.

Here's the thing, though. I don't think people who are concerned about President Trump's stance as a nationalist in the worst possible sense of the word really should be upset. Why? Because I don't think Trump particularly cares about America all that much. I don't mean that to sound super negative . . . I don't at all think that he actively dislikes our country. He's not super and steadfastly into her, either. I don't think he knows that much about the United States or offers this nation much time of reflection or critical thought.

So why does Trump state he is a nationalist while speaking to his supporters at the ridiculous rallies he enjoys so much? Because Trump cares about Trump. That's it. His concerns (assuming his internal dialogue occurs in the third person) are "What is good for Donald Trump?" and "What will make Donald Trump happy?" So, he just says whatever will get people to cheer for him. He likes cheering. A lot. And saying "nationalist" at a Trump rally is a great way to hear some cheering. To that same end, Trump likes to throw out a few other proven phrases like "Hillary Clinton!" (to which all rally attendees are required to respond "Lock her up!") or "jobs, not mobs" or "anchor babies" and then just soak in the applause. These moments are ego strokers for him.

Does Trump really believe in the words that he says? Eh. Probably not really. He does not seem to have a consistent belief system, after all. He's adamantly pro-choice and then he wants women who have abortions to face criminal charges. He thinks the electoral college is ridiculous and then it's pretty awesome when it means he wins. He's a Democrat and votes as such and hangs in those circles for many years but now all that has changed. He pledges to repeal and replace Obamacare but then decides some of its components could stay . . . which gets him close to his previous stance in support of universal health care. He claims to be a born again Christian but also cannot think of a single thing for which he needs forgiveness. He's been known to flip flop on an issue multiple times in one day, from immigration to trade policy to who he should fire, based on the most recent person to have his ear.

Without consistent policy to guide him, it comes back to the need for applause and validation. If Trump felt like people would cheer for him, I think he would stand on a stage and proclaim that we need to ban all guns or that Colin Kaepernick is taking an important stance or Nancy Pelosi is an effective legislative leader or we should consider Spanish as our country's official language.

So, I don't believe that Donald Trump is a nationalist in the way that his detractors condemn. I also don't think he is really a racist, as many say. He doesn't put enough thought into his language or his opinions about anyone or anything to be a racist.  (Does he embolden people who are racist? Sure. Because they cheer for him when he says things they like and, as already noted, he likes that so he continues to do it.) He just likes Donald Trump. Very, very much. And he wants to stand in front of adoring people who loudly share how much they like the words that come out of his mouth, whether or not those words mean anything to him at all.