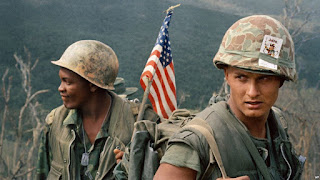 Maybe you were part of a group of farmers and blacksmiths who fought against the most powerful and best trained military in the world because you knew that taxation without representation was not right. Maybe you wanted to preserve a union that had been fractured due to slavery and changing economies. Perhaps you fought in trenches in the war that was meant to end all others, as mustard gas swarmed around you and the British and French allies standing beside you. It could be that you were a scared teenager sent to fight in a jungle only to return home to a country that didn't appreciate you or maybe even disdained you. Maybe you were charged with providing desperately needed food to a starving nation while warlords violently attacked your every effort.

Did you decide to enlist because serving in the military is part of a proud family tradition and you were honored to wear the uniform as your father and grandfather had done before you? Did you walk to the nearest recruitment center after you turned on the radio and heard FDR telling the nation about a day that will live in infamy? Did you sign a contract to serve the day after you watched those towers fall on your television screen? Did you join the military out of economic necessity? Or perhaps to choose a life different from the one offered by a family or neighborhood that was steering you down the wrong path? Maybe you didn't want to join at all but your number got called and you answered for duty.

Maybe you look forward to the opportunity to be a guest speaker at Veterans Day programs held at your local elementary school every year so that you can share your important experiences with the youngest generation among us. Maybe you don't like to talk about your service with anyone. At all.

Did you have a large family waiting for you at the base when you returned from your latest deployment? Perhaps even a baby you were meeting for the first time? Or, did you walk off that plane and scan the crowd not to find a single familiar face excited to welcome you home?

Did you walk through the liberated concentration camps and stare at the gaunt faces with the skeletal bodies and understand the full weight of the atrocities you had been fighting? Were you were one of the Marines who survived when your barracks in Beirut were bombed while hundreds of brothers around you died? Did an IED in Iraq claim your leg or arm or eye?

Maybe you fought a Communist regime that starved and massacred its own people or fought with Mexico over the correct southern border for our expanding country. Did you stand opposite your cousin on a bloody field in Gettysburg? Did you fight in the snow or the desert or on beaches or through the streets of a city?

Some of you were sent on a mission that had a clear purpose and with intentions that were noble. For others, perhaps the orders you received sometimes left you wondering why you even were there in the first place. You have served under presidents who knew what it was like to face war and approached sending you into battle or hostile territories with the solemnness that such a decision deserves and other leaders who perhaps were reckless with your lives. But still you went.

The experiences of our veterans are diverse and each story is one that deserves to be known with rapt attention. But despite all of the differences in experiences and geography and outcome, there are few things that are true no matter what.

First, you are brave. So brave. You stand in the line of fire to defend millions of people you do not know. You believe this country and its ideals are worth giving your life, if necessary. Not only that, but you offer your life to build schools and wells for fresh water. You offer protection for the most vulnerable around the globe. You leave your own children behind in an effort to ensure that I can continue to live in a free and safe land where I can hold my own kids closely whenever I want. Many of you were just a few years older than my daughter when you went to Antietam or the Spring Offensive or Omaha Beach or the Korean Peninsula or Saigon or Baghdad or Kandahar. That's stunning.

Second, I don't think about you enough. It's true. I talk about your courage and sacrifice with my children on days like today. When I see you in uniform, I try to remember to thank you for your service. But when I'm sitting down to a Thanksgiving meal with my kids later this month, will I take time to think about the many holidays you missed with your families while serving overseas? When I see the homeless gentleman who stands in the same spot every day on my commute to work with a sign that reads "Veteran. Please help," am I doing all I can to fulfill his request?

Third, I am thankful for you. Just reflecting on the sacrifices that you make and your subscription to the notion of a purpose bigger than self is amazing. And to think about the contributions you continued to make to this country through pursuing your education or raising your families or caring for others who served alongside you and keeping alive the memories of those who did not return . . . my awe and respect grows. Thank you.

In humble gratitude,
Sarah
Posted by Sarah at 8:35 PM