When Women Support Women But Only When Those Women Think Like Women Should . . . 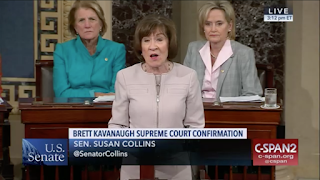 In a tweet that went viral through thousands of retweets and shares on other social media platforms by celebrities and "regular folks" yesterday, a woman named Amy Westervelt proposed that Senator Susan Collins props up the patriarchy and is "our Uncle Tom." I think this is ridiculous.

Senator Collins did her research. She studied Judge Kavanaugh's judicial history. She interviewed him for two hours. She discussed his nomination with her colleagues and her constituents. And then, she stood on the Senate floor and shared her decision in a speech that was viewed by millions of people - a speech that she knew would make many people angry and result in threats to her career and her personal safety. But she did it anyway. Instead of being called brave, though, for standing up for what she believes, she is called an Uncle Tom. Instead of getting credit for being an intelligent woman who is capable of thinking about an issue and reaching her own conclusion, she is deemed a pawn of the patriarchy.

Because for some, there is only one correct way to think if you are a woman.

I don't know if I would have made the same decision that Senator Collins did. But, I respect that she came to a thoughtful decision and was willing to proclaim it. (And then Senator Joe Manchin of West Virginia only quietly echoed his support for Kavanaugh after Collins loudly announced hers . . . wuss.)

If you do not agree with Collins' speech and her vote, then work to make sure she is no longer a senator after her next campaign. I get it! Go for it!

If you truly are an advocate for women's equality, for women's intelligence and strength and courage and resilience and beautiful diversity, then shouldn't you be willing to acknowledge that women might possibly have differing opinions that still are of value without dismissing them as Uncle Toms or sellouts or making fun of their appearance or speech (yeah, that happened yesterday, too)?

Are you willing to accept that women have thought through both their pro-life and pro-choice stances (I dislike both of those terms, by the way)?

Are you willing to listen both to women who want birth control offered in the office of every high school nurse and women who advocate for no sexual education at all in schools?

Are you willing to listen to women who don't feel like they are oppressed by the patriarchy on the regular and those who truly see their personal and professional choices being restrained by the men in their lives and society in general?

Do you believe that women of substance and intelligence can believe both women and men when accusations and rebuttals are shared? Is it possible to have conflicted and complicated feelings?

In the six presidential elections in which I've had the honor to vote, I have voted for one Democrat, three Republicans, and two "others." I'm definitely a "vote the person, not the party" kind of gal. (Although I do tend to vote more "D" at the local level . . . it's the staunch federalist in me)  I certainly don't believe that women HAVE to vote Democrat in order to be enlightened or independent or "woke." I think there is room for valuable dialogue and compromise on both sides of the aisle - a waning sentiment, I'm afraid.

Yesterday, comedian and activist Chelsea Handler took to her Instagram page to advocate voting for women in November, simply because they are women. When asked in a comment about the value of voting for a woman based on her sex, Ms. Handler responded that "until we have equality represented in our government, women will never be treated equally. We need to get women in office in order for that to happen." I don't think she really believes this, though. Not completely.

Question for Ms. Handler: In Tennessee, we have a race for United State Senate that has Republican Marsha Blackburn facing off against Democrat Phil Bredesen. Rep. Blackburn has TV commercials that feature her embracing Donald Trump before Trump mocks her opponent. Blackburn is anxious to "build that wall" and she would not have kind words to say about the abortions you share that you have had. As a woman, should I vote for Blackburn because she's a woman and we need equality of women and men in elected office? I'm guessing that Blackburn is an exception to your efforts.

And, for the record, I will not be voting for Blackburn. I mean, congrats to her on having ovaries but I'm not going to support anyone who opts for embracing Trump as her key to victory. And, I don't base my vote on a candidate's estrogen levels.

When we have smart, capable, confident women who represent a variety of perspectives and experiences and priorities and are willing to engage in our national conversation with others who are willing to listen, that is when our nation will be at its strongest.

I'm not talking about incorporating into legitimate conversation women who spew hate or advocate abuse or engage in racism or other damaging prejudices. I just want women to have respect and appreciation for other women who have something different to say. Of course, this means accepting that some women think other women are Uncle Toms and believing they should have a voice to express that! And I do! It also means that I can say I disagree with you on that point and I think you are selling women short.

I don't know. Maybe I'm just a pawn of the patriarchy, too. But I don't think so. I think I'm a really smart, independent, funny bordering on hilarious, sensitive woman, professional, mother, daughter, and friend who wants to learn from the wide spectrum of thought from the women around me.

With that in mind, I would love to know what YOU think, too!
Posted by Sarah at 10:54 AM