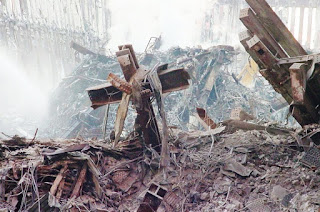 This week, my daughter asked me the question that serves as the title of this post while we discussed the horrendous events that occurred seventeen years ago. She is now at an age at which I can share some of the more difficult events and emotions of that day. She also is now at an age at which she is questioning faith and religion (two very different things), and I encourage her to explore all of her confusion and questions and doubts. I know some believe she is too young for these conversations and needs to be told what our family values are and that's that. I, on the other hand, want my kids to live by the motto - question everything. This comes with an important addendum. Question everything thoughtfully and respectfully. Unless I'm telling them it's time to go to bed . . . then they just need to do that.

I responded to this particular question by telling her that many people were asking that very same thing in the days and weeks that followed the murder of thousands of innocent people along our East Coast. I also told her that I did not have a good answer for her. As a Christian and as the head of my home, perhaps I should not admit to not having a better answer for her. Perhaps I shouldn't be sharing my lack of certainty with all of you so plainly here. But I have found that my faith eventually grows deeper when I test it, when I come to admit I now see an issue differently than I did before, or simply just admit my frustration when some things don't make sense. (And I would like to note that "Losing My Religion" by REM just came on the radio as I typed this paragraph. Well played with that heavenly sense of humor.)

Did God sit back and watch while terrified sixth graders were flown into the side of a government building instead of arriving safely to a field trip in California sponsored by National Geographic?

Did God make sure every stairwell was blocked so that anyone working above the impact of the plane received an automatic death sentence?

Was He listening when one of those trapped workers called his son's high school in New Jersey and asked if his boy could come to the office so he could talk with him one more time?

I have been told that our planet is a fallen place on which evil exists and that we will not experience true peace and a restored heart until we get to heaven.

I've heard that God allowed 9/11 to happen because America needed to repent or because He wanted us to appreciate one another more.

I have read that God collectively held us and wept with us as we were watching the horror unfold and during the grieving that followed.

Others have explained to me that humans were given free will and it's not God's place to intervene in the destructive plans of humans who will have to pay consequences for their bad free will choices.

Maybe I'm more comfortable with the theological notion to which some subscribe that states God got everything set up for us some time ago and now just kind of sits back and lets us do our thing. Otherwise, the seemingly random joy and pain (h/t Rob Base & DJ EZ Rock) that we experience seems so cruel. I never am comfortable when family members of returning soldiers say something like, "I'm so happy that God was looking out for him and protecting him so he could come home safely!" Does that mean God failed to protect his buddy who was twenty feet in front of him and got blown up by an IED? What about my high school friend with brain cancer who has spent her entire life in service to others? What about children who live in homes in which terrible abuse occurs?

But the complication is that I've found the laid-back approach not to be true of the God who has made His presence known in my life time and again. I have found Jesus near me when I've read and reflected on His words in red, when I've been scared or felt alone or when I've felt great peace and joy. The great commandment to love your neighbor just makes sense. Jesus walks and eats with the lepers and the tax collectors and the oppressed and the "others" and the "outcasts." He is inclusive. He is love. He teaches me and make me want to be a better person. But that's New Testament God. It's the Old Testament God who I more can see orchestrating or at least being complicit in 9/11. My problem is building a solid bridge between the two. I get stuck.

I'm not satisfied with the answer I hear a lot - Our human minds just can't comprehend God or His master plan. We just have to be OK with not knowing and maybe we can ask Him all of these difficult questions when we get to heaven.

I can't get to the point where I'm comfortable telling my children, "It's not up to us to understand why those kids were killed on the planes. Or why their parents died at the Pentagon." With that answer, no wonder my daughter has questions about where God was or if He really wants the best for her and her brother.

About ten years ago, at a previous church I attended, one with a massive membership and that is well known in the Nashville area, the senior pastor had the ushers hand out cards to every person in the pews. He simply asked us to select, anonymously, from a series of four or five statements the one that bests describes our current relationship with God. The next Sunday, he started to cry as he shared that two-thirds of his congregants responded that they don't feel close to God and don't consider themselves as having a strong faith. But here they were sitting in service week after week. Maybe some of you would have chosen the same statement on that card. There are some days (years?) when I would.

I yearn for more than that. I don't want to sit in church every Sunday because it's the socially acceptable thing to do or because it makes me feel good. Are you in the same place as me? I come to with you this honest post because perhaps you are struggling to talk to your kids about where God was on 9/11. Or when their friend got sick. Or when you got divorced. I want you to know you are not alone. As much as it made me sad to see my pastor upset, it helped me to know that there were others sitting all around me who appeared to have it all together but who also, apparently, didn't have all the answers and who weren't on a powerful and unwavering path with their faith.


For my atheist friends, I know that events like 9/11 and children getting cancer and hurricanes that leave thousands homeless further justify their belief that there cannot be an omniscient, all-loving God. Believe me, I get it. But for others of faith, do you have trouble answering these questions from your children? Is anyone else willing to share that they struggle with these issues themselves? Or perhaps you can share with me why you do not wrestle with this. I would love to learn from you!