To My Daughter - It's OK to Have Questions 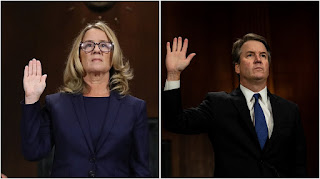 I had the hearings on all day at my desk yesterday and listened to as much as work meetings and other responsibilities allowed. I thought the entire day was heartbreaking.

Professor Ford's opening statement and subsequent testimony were powerful. She is a woman who undoubtedly has endured trauma and I am thankful for her courage in speaking up despite being, as she admits, terrified. I cried as she spoke of what she endured as a fifteen-year-old girl. Because of her willingness to share her experiences, there was a 147% increase in calls to the National Sexual Assault Hotline yesterday. That is heartbreaking but also so important.

I also teared up during Judge Kavanaugh's opening statement. He has daughters who love him very much, who undoubtedly are very confused about the accusations being made against their dad. If he is indeed innocent of the charges being made against him, then his anger and his emotion are understandable. I also will admit that as the afternoon wore on, my distaste for him grew. He was dismissive, arrogant, and really eager to share how much he likes beer. I felt the entitled young man who attended Georgetown Prep was letting himself show. I didn't like him.

Despite my strong reactions, I still have questions. Am I allowed to admit that? To be honest, I'm nervous even writing this blog post. According some on social media, there is only one way to think. If I see the humanity in all parties involved as these tragic events unfold, then I'm a pawn in the patriarchy that hates women and you should feel sorry for my daughter because she is being raised by me.

I have talked with my daughter about what is happening in the Senate this week. I have told her how brave Professor Ford is for coming forward to speak her truth. I have told her that Judge Kavanaugh just as adamantly denies anything happened.

She also needs to know that nearly 10% of rape victims are male and one in six boys and men experience some type of sexual assault. That matters, too, and their stories also need to be heard.

SHE NEEDS TO KNOW THAT ONLY TWENTY-THREE PERCENT OF RAPES AND SEXUAL ASSAULTS ARE REPORTED TO POLICE. That is so damning of our society and justice system.

I want her to be a friend who listens when other girls tell their stories. (She already has been that friend once, when in fourth grade she listened to another girl's horrific story of abuse. I am proud to share that she handled it with compassion and love and, with my help, got the abuse reported.) I want my girl to be heard and held by a village of women around her if she, tragically, ever needs to share a story of assault herself.

But I also will tell you that my twelve-year-old daughter has questions about all of the parties involved and she needs to know that's OK as well. She is allowed to explore all of her feelings and doubts. I am never going to tell her how she is SUPPOSED to feel just because she is a girl. That notion is as insulting to womanhood as anything else. We will discuss everything, and I will listen more than I talk.

The truth is that at forty-three years old, I'm still working through so many questions. Like this . . .

How many women who are understandably speaking out in anger about the Kavanaugh nomination now also spoke out against Bill Clinton in 1994 when Paula Jones' allegations became public? Or, how many even voted for Clinton's second term in 1996? How many made fun of Jones' hair and accent? I was in college and I remember that happening a lot.

That was more than twenty years ago, you say. We live in a different, more aware culture now, and when you know better, you do better. I absolutely believe all of these things to be true.

However, many people STILL treat Bill Clinton like a senior statesman. We listen to what he has to say on important matters. This is despite additional rape allegations from Juanita Broaddrick and sexual assault allegations from Kathleen Willey and admitted consensual sex with a young woman over whom he held a lot of power. This is despite the fact that just this year President Clinton said he would not have approached any of the allegations against him any differently.

Less than two years ago, a majority of voters were ready to welcome Bill Clinton back into the White House, this time as the spouse of the president. I get that many selected Hillary Clinton as the lesser evil alternative to Trump, and that certainly is understandable. I never, ever could vote for Trump. But did Clinton voters hesitate for a moment when they went to push that button? Does Hillary Clinton have a responsibility to speak out on behalf of her husband's alleged victims as women are being told to speak up and rise up now? Was there concern for the women who Bill Clinton is alleged to have abused and how they would feel having him back in the national spotlight? Does Bill Clinton get more of a pass because he is more charming than Trump and his political stances are more acceptable?