The Essential Opinion of a Suburban White Woman re: Kaepernick and Nike 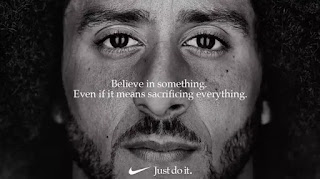 I know that over the past 24 hours, many of you have been thinking, "So, what does a typical 43-year-old white woman living in the suburbs of Nashville think about Nike's new ad campaign featuring former San Francisco 49ers quarterback Colin Kaepernick?" I am here to help answer that burning question for you.

Here are some of my initial thoughts on the controversy:

1. I showed my daughter the print ad last night. We talked about the progression of kneeling during the national anthem over the past couple of seasons - why it started, why many are opposed to it, how I feel about it (more on that later), and how she feels about it. I told her that some of her friends may be told they no longer can wear their Nike sneakers or clothing. I told her she is more than welcome to continue to wear hers. I shared that I think it's just silly that some people are burning items already purchased. If you don't want to wear those shoes anymore, at least give them to a homeless person whose feet otherwise will be cold this winter. (Caring for the poor and the marginalized? That is . . . or that always should be . . . American.)

2. I am not a big fan of Colin Kaepernick. I do not think he is the greatest messenger for the injustices on which he is trying to shed light. The "police as pigs" socks were in poor taste. I think that wearing a Fidel Castro t-shirt, particularly while in Miami, showed a lack of understanding of history and political philosophy. I wish I could be a bigger fan of him as a social messenger, but I can't. There are many other players who are leaders of this movement, like Malcolm Jenkins of the Eagles, who are incredibly persuasive, sometimes without even saying a word:

3. I think the message that is being sent by those who choose to kneel on the sidelines is an important one. There are injustices in our criminal justice system, our education system, and simply in the way we view one another. These are conversations that need to be had, and the players have been a catalyst for that. Why do the players choose to protest during the national anthem and right before a football game instead of in front of the local courthouse on a Wednesday morning? Because on Sunday afternoons is when millions of people are paying attention. It's the same reason that athletes raised their fists while standing on the podium in front of a global audience at the 1968 Olympics - people were watching. And it became one of the most iconic moments of the 20th century. 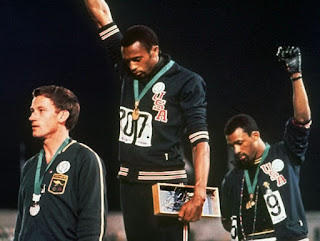 Also, many of these NFL players are donating millions of dollars and many hours of their time in their communities when the TV cameras are turned off and we aren't looking. Many of these players have family members who are police officers and members of the military. I believe them when they say their kneeling is not an affront to these groups. I have veteran friends who have told me that the freedom to protest is exactly why they served.

4. That said, I get why so many people are upset by those who kneel during the national anthem and by an ad campaign that promotes the idea that Colin Kaepernick "sacrificed everything."  He didn't . . . he is healthy, he is a millionaire, and he will be just fine. There are millions of men and women who have died defending our flag. There are millions of people around the world who dream of our flag as a representation of the freedoms they wish to have. It is what we fly at half staff to honor our dead and what we wave at parades and on the Fourth of July in celebration and thanks. It's not just a piece of cloth; it is, for many, a powerful symbol of sacrifice and hope. When my friends tell me they are going to visit D.C., I tell them that if they do nothing else, they must visit the US Marines War Memorial (Iwo Jima Memorial) at night. It takes my breath away every time. 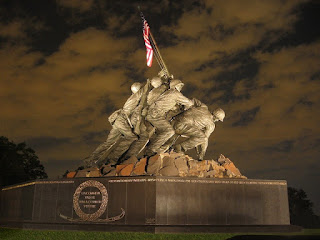 I just wish that those on both sides of this debate would recognize that there is some validity in allowing the other side to be heard. Shouting each other down is fruitless and divisive.

5. The print ad with Kaepernick is visually stunning. I love the photograph and the message. Even if you do not care for the specific messenger, it's a powerful reminder that true belief in a cause or a person is worth sacrificing everything. Well done, graphic design/marketing people.

6. Donald Trump is loving every second of this. The "kneeling issue" essentially was coming to a quiet close a year ago and then our president decided to speak out about it during a rally in Alabama. He yelled that it would be great for an owner to "get that son-of-a-bitch off the field and tell him he's fired!" And the crowd went wild! I don't think President Trump particularly cares about the national anthem or the flag, but he sure loves it when people cheer for him because Donald Trump only cares about Donald Trump. He found some red meat that works with the NFL protests and it since has become one of his favorite ways to get guaranteed applause.

7. I love our Constitution and our First Amendment. I read the entire Constitution at least once a year and Constitution Day is one of my favorite holidays. Kneeling during the national anthem is not a free speech issue. The First Amendment protects citizens from retribution or censorship by the government when speaking. It is not there to protect a citizen from getting fired or facing other consequences from a private entity like the NFL. The owners can choose any restrictions they like, and they do. And we, as fans, have the right to express with our dollars and our television viewing if we like or don't like the decisions being made by both the players and the owners.

8. I love our country. I love her so much and I think often how fortunate I am to live here. I was birthed at a longitude and latitude that has allowed for freedoms and opportunities that women no different than me in other countries can only dream of having. I always stand for our anthem. As the song is played, sometimes I am thinking about the many amazing things about our country. Other times, I am more reflective on some of our current struggles and that we still are striving to be a more perfect union. If others have a different experience when our anthem is played, who I am to tell them their feelings are wrong or less valued than mine? How boring our country would be if we all had to feel the same way about something. How sad it is today that many of us don't want to hear one word from someone who feels differently than us.

So, those are some of my initial thoughts, and they are borne of my perspective and experiences. I know many disagree with me, and I would love to know your thoughts as well. Because if we aren't listening to each other, than none of this has any point.
Posted by Sarah at 8:12 AM