Support Survivors and Due Process 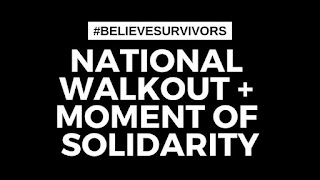 When I was a freshman at the University of Maryland, our school newspaper, The Diamondback, ran a full-page ad with a headline stating "All of these men are potential rapists . . ." Then, in tiny print, thousands of men's names were listed - every undergraduate male at the university. I don't remember which organization sponsored the ad, but the intention, I believe, was to bring awareness to the notion that any man could be the perpetrator of sexual assault. There was a great deal of backlash around campus as male college students did not like their names tied to the term "potential rapist" as a generally applicable label. The campus was quite tense for several weeks as a result.

Today, people across the country wore black and shared the hashtag #BelieveSupporters, the reason being to support Professor Christine Blasey Ford and the other accusers who subsequently shared their stories about alleged sexual assaults by Judge Brad Kavanaugh, who now seeks a seat on our highest court.

Like I did with the ad in The Diamondback twenty-five years ago, I have mixed feelings about the effort made today. I think it's important to raise awareness, but I want to be careful with the process.

Let me start with this. I believe that every woman should be taken seriously when she makes claims about sexual assault. I don't care if it happened five minutes ago or thirty years ago. The human race has a poor track record throughout history of not taking seriously the charges made by women, and even demonizing or threatening the women who were bold enough to share their stories. It's no wonder that such a large number of attacks never get reported. We need to listen to these women. We need to look them in the eyes and assure them that their allegations and their emotions are being taken seriously. We do NOT need to ask why they didn't speak up sooner or about their other sexual experiences. We certainly do not need to respond with some garbage about "youthful indiscretions" or "boys will be boys." We definitely shouldn't send death threats because the accuser does not agree with your political ideology.

I have been the recipient of lewd gestures and comments, as recently as last month when two guys in a pick up truck swerved into my lane repeatedly to get my attention, nearly causing me to run off the road, and then made vulgar gestures out their window and laughed. I have experienced unwanted advances and unwanted hands on me. I have a clear memory of sitting with a boy in high school and apologizing to him over and over again because I did not want to go as far as he did. I told him I knew I was being awful and uptight and I was so very sorry. I see now how twisted my reaction was. I have friends who have been raped, who have been pressured into sex, who have endured physical and sexual and emotional abuse.

There is no doubt in my mind that we have a culture that excuses sexual aggression and assault by boys/men. We have an environment in which women are afraid to speak up and in which we choose to repress evenings of abuse or make excuses to convince ourselves what happened wasn't so bad.

All that being said, I think we need to be careful about putting allegations on the conviction fast track.

Due process is important. The notion of innocent until proven guilty matters. And, it matters the most when the accusations being made are highly repugnant. That is exactly when the protections of the Constitution are the most essential. Making sure that the nice guys and the peaceful neighbors are afforded their rights under the law -- that's not difficult.

I am no defender of Judge Kavanaugh. At all. I will not be shocked if every detail alleged by the women who have come forward is eventually, somehow, proven true. And if so, he must step away from consideration. But, do we really want to be a people that replaces a lack of respect and attention for the accuser with a readiness to condemn the accused? I don't.

Yes, Kavanaugh is a white man of great privilege. He attended a high school at which the entitled class got away with plenty of distasteful and even criminal behavior with the (correct) belief that mommy and daddy could make it all go away. But if we do not afford him the right to share his side of the story regarding the allegations made against him, if we do not allow him to state his defense before convicting him and deeming him ineligible for the esteemed office he seeks, then we also must be OK when an Hispanic school janitor is fired because he was accused of stealing jewelry from a girl's locker even though her friend actually took it. We need to admit it's cool for a black teenager to be detained in the back of a police car in handcuffs for hours because he "looked suspicious" in an upscale clothing store. We need to agree that every person ever arrested should have to put that accusation, whether it bears out as true or not, on job applications forever. Because we should want to hope that our Constitution, that our rule of law and due process, sees all of these instances the same.

Should we listen to these women who have come forward and accused Judge Kavanaugh of awful acts and take their pain and their experiences seriously? Yes. Should we stand shoulder to shoulder with every woman who refuses to remain silent in this culture that can be so damaging to our girls? Absolutely. But let us not lose sight of other principles of justice in the process.