Seventeen Years and a Street Corner 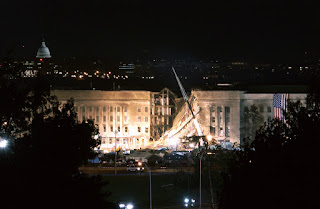 This morning, I stood on my front porch and watched the kids gather at my son's bus stop. Three of them have parents who have spent their entire lives in Tennessee. Two kids have a grandmother who is Native American. One kid has grandparents on the east coast, another kid has relatives out west. Three kids have parents who were not born in this country and mothers for whom English as a second language is still a struggle. I know the parents of the kids at that bus stop did not all vote for the same presidential candidate in 2016. I know the parents hold differing opinions on our country and its promises.

The kids who board the bus every morning bring diverse experiences and cultures and opinions and pain and joys to that corner. But still, every morning I watch as they yell out and greet each other. I watch them all laugh and tease one another. I see the lone fifth grade girl, the obvious beacon of maturity, be as patient as she can be with all of the rowdiness around her. I see the older kids hang back and make sure the young kindergarteners are safely on the bus first. When they get off the bus this afternoon, one of the them will find a soccer ball or a football and everyone will be invited to play a pick up game in the street.

On Friday, September 14, 2001, I left my apartment in Maryland and drove past the still smoldering Pentagon to my then-boyfriend's (now ex-husband's) apartment in Arlington, Virginia. We went out to eat in D.C. because we wanted to be in the city that we loved so much. We walked by and made eye contact with people who, like us, weren't really speaking much. We listened to the military helicopters fly overhead. We pushed our food around on our plates and didn't discuss the thoughts and the images that we could not get out of our minds.

After dinner, we headed the couple of short miles back to Arlington and walked to a street corner that quickly was filling with adults who came from a variety of backgrounds - a street corner much like the one my son and his friends now occupy every morning. The people we approached were singing and hugging and crying. Someone brought drinks for everyone. Someone else brought American flags. Several people passed out candles. As the night progressed, the crowd on that corner got larger. There was a desperate need for us just to be together as strangers who still were in shock, who were scared, and who now were in a world completely different than the one we had known just a week before.

As we stood on that corner, we were less than a year out from one of the most contentious elections in our nation's history. Some of us standing there had voted for Bush, some for Gore. Might even have been a few Nader folks in the mix. There were men and women who worked nearby at the Pentagon and were wearing their uniforms. A Metro bus driver joined us, as well as graduate students and a waitress and a grandfather. Black, white, immigrant, veteran, Hispanic, straight, gay, old, young . . . we were all on that crowded corner looking out for one another and focusing on what held us together, again much like the bus stop on my block today.

Maybe on September 11 you were, like me, a high school teacher in Maryland who had a classroom filled with kids who had at least one parent who worked for federal government, some in the Pentagon. These teenagers were looking to you for answers as they all watched the horror unfold on television screens rolled into classrooms.

Maybe you were like my sister, who taped up her windows in Brooklyn to keep out the toxic dust floating over from Manhattan and who, as a bartender, listened to the stories of the recovery workers at Ground Zero in the weeks and months that followed. What those responders described finding in the wreckage day after day was considered too gruesome for the nightly news. They didn't want to go home. How could they close their eyes just to see those images again?

Maybe you were a young mother in Nashville or a college student in Georgia or in the air force stationed in Florida or starting your shift at a bank in Idaho. Maybe you were the Republican Speaker of the House in Congress or the Democrat mayor of Washington, D.C.

You know who you were and where you were, and I feel confident that you would have joined me on that street corner three days after the evil attacks on thousands of innocent people. We would have hugged. We would have found comfort in the common humanity we share. We would have felt a resolve that bonded us.

The attacks of 9/11 occurred just before smart phones and social media changed the way we communicate with one another and the way we get our news and information. It's so easy now to be cruel from behind the screen of an iPhone or laptop keyboard. Check out any comments section online and you will find people using terms like "libtards" and "RepubliKKKans" every day. I promise you, sadly, that you will find such cruelty even on this solemn day. It's so easy to read countless internet articles and watch cable news talking heads who will affirm our worldview 24/7 while validating our conviction that the "others" are dangerous and wrong. So many of us are so angry. We not only dislike our leaders, but we passionately disdain anyone who voted for the leaders we don't like or who support policies different than the ones to which we subscribe. It was not like that in 2001. I know; I remember. Yes, people were angry after that election and continued to be so throughout Bush's presidency. But I don't think it compares to what we are witnessing today.

Our nation was bitter and raw after the 2000 election, but, at least for a while, we came together in lines to give blood and to be more patient and to volunteer and to offer comfort. What do you think would happen if our nation was faced with a similar crisis today? I'm not asking if we would drape flags on every overpass or spell out USA with red Solo cups in fences. I want something deeper . . . I'm asking if we once again would find our common humanity. Can we be more like the elementary school boys and girls who seek out ways to interact and help each other?

Sadly, I cannot state with confidence that we would come together as a nation in the same way that we did seventeen years ago. And for my part . . . which is the part I can control . . . this 9/11 anniversary reminds me that I can do better. I can be more patient and more kind when I disagree with people. I need to say "I love you" more. I need to look for more ways that were are alike, not different. I should be more welcoming of strangers. I should strike up conversations whenever possible instead of looking for the comfort of my quiet corner. It's a lot easier to find our common humanity when a crisis strikes if we always take a few minutes to humanize whoever happens to be standing right in front of us at any given moment.

On September 11, 2001, it did not matter to the terrorists if you were Christian or atheist or Muslim or Republican or Democrat or a single mom or a cancer survivor or an undocumented immigrant or a investment banker with Cantor Fitzgerald or a dishwasher at Windows on the World or an officer in the United States Army or a two-year-old girl on her way to Disneyland. Death did not discriminate. Let us remember that on this day and, when our nation is shaken to its core the next time . . . because there will be a next time, let's agree to meet on the street corner, check on one another, and go from there.
Posted by Sarah at 10:32 AM