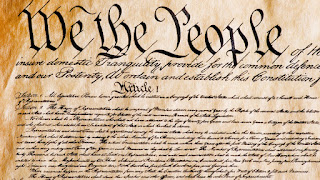 Happy 231st birthday to you! You look amazing! I thought about making you one of those cakes with blueberries and strawberries and whipped cream to be all patriotic, but I decided that would be cliche. And you are way too cool to be involved with anything cliche.

I thought you might be feeling a little down on your special day, so I wanted to write you this letter to cheer you up.

I know we have a president (whose powers come from Article 2, but you know that, of course) who does not have a lot of respect for you and how important you are to the foundation of our country. Has he ever read you? I'm not convinced he has. At the very least, I know he is a little fuzzy on the separation of powers that you established. He also has shown that he isn't a big fan of your First Amendment or Fourth Amendment or Sixth Amendment or Eighth Amendment or Ninth Amendment or Tenth Amendment (just to name a few). And that's too bad, because your Bill of Rights is one of my favorite parts of you. And he's not alone. I'm afraid there are way too many people on both sides of the aisle who don't know nearly enough about you.

There are people who do not understand your intentions and who think they are protected from consequences from their employer for staging a protest or who think because they are teenagers they can use whatever foul language they want around my kids at a pool that is managed by a private HOA. There are those who argue the Electoral College is unfair and outdated without appreciating that it is in perfect alignment with the federalist system of government you created. There are some who get upset when a Christian club meets on school property after classes are over and others who think it's perfectly fine for a principal to lead a prayer to Jesus before a school concert because most people in the room believe in Him (both are wrong).

Sometimes I feel like people just appreciate your packaging. Oh, isn't she beautiful! Oh, yes, I love the Constitution! But, they don't really want to listen to all you have to say. Or, they only tout your words when what you decree fits their narrative. Freedom for me but government intrusion for you! I don't like when your guy acts in opposition to the Constitution but I'm cool when my guy does because I like the way he talks! Does that bother you? It bothers me. You apply to everyone.

Despite all of these struggles and misunderstandings you forge ahead. You continue to form the structure of the longest, continuous democracy in the history of this planet. (By the way, do you get as annoyed by people who get all self-righteous and scream "We're not a democracy; we're a constitutional republic!" as I do? Yes, we are a republic. I get it. But "demo" means "people" and "cracy" means "form of government" and we do vote for the leaders who represent us and the whole Constitution starts off with the words "We the people," so I'm cool with continuing to call us a democracy.)

You know what else I love about you? You knew from the start that you weren't perfect so you created a means by which you could be amended and improved. In today's political environment, it's hard to imagine anyone admitting that his or her position on any subject is anything but flawless. And listening to others who might alter your perspective? That's crazy talk.

But you did just that - you listened and you changed. As the wise Maya Angelou said, when you know better, you do better. Making slaves 3/5 of a person for the purposes of population counting in determining Congressional representation? BIG swing and a miss. HUGE. Initially deciding that only white men who owned land could vote? Bad move. You blew it there as well. But you fixed it . . . at least mostly. You asked the states to debate and ratify amendments when improvements were needed. You established the Supreme Court (Article 3) so that your words could be tested against the challenges that would come as our nation grew and evolved.

Are we still striving to be the "more perfect Union" that your preamble states you intended to establish more than two hundred years ago? Of course we are. And I think your precise wording meant you knew that a nation made of flawed people never will attain perfection. But please be patient with us as we keep trying.

The kids and I will talk about you today. And not just today. I am doing what I can to make them informed and active citizens. I hope that other families take a moment to recognize you as well. Maybe some people will read a part or all of you today and see the words in a new way. Maybe someone will be inspired to study one of your provisions more to discover how our understanding of a particular situation was in 1787 and then 1861 and finally 2018. Maybe someone will think about the rights and responsibilities that you embody and will carry that thought to Election Day and make sure nothing stops her from voting.

I hope you get a few minutes to celebrate today! Do something that you really enjoy! Maybe watch a criminal trial in which an indigent man has an attorney and a fair trial. You did that! See the checks and balances you set up in action as the Senate deliberates the confirmation of a possible Supreme Court justice. That's all you, too! Peek in on worship at a church or a mosque. Watch others walk by both buildings with no interest in entering. Watch all of them not get in trouble by the government for any of their spiritual choices. Yep, you again! Have a glass of wine tonight! (OK, you briefly messed that one up but soon made it right.) See the people of Texas decide what their state needs and then the people of West Virginia determine that its economy and demographics and geography require something different. You guessed it! You, again! See a man legally purchase a gun and see another man protest that that type of gun should not be legal. Both acts? Yep, you guessed it . . . you are all in the middle of that. Walk along a 25-year-old woman who is the first generation of her family to be born here and is so passionate about our government that she is running for Congress. Can you believe you had a hand in that as well?

I love you, Constitution. You are one of my favorite things ever put on paper. May you have many more years of keeping this country on its rails but also staying out of the way when needed to let us mess up or succeed on our own as well. Here's to you!!