My Oppostion to Murder by the State 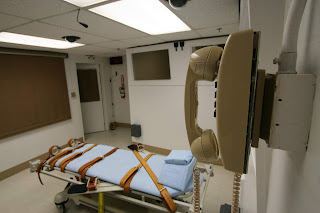 Last Thursday, the state of Tennessee executed Billy Ray Irick. It was the first state-sponsored murder where I live in nearly nine years. This was after Irick sat in prison for thirty-three years as, with many acts involving the government, the process from conviction to execution is not particularly efficient.

No small number of people across our super Christian state cheered and proclaimed that they hope he suffered in his final minutes. "People like him deserve to die!" they yelled. I took no such joy in his death.

Let me be clear. The heinous crimes that Irick committed on a seven-year-old girl back in 1985 are vile and stomach-churning. If he had raped and murdered my young daughter, there is a good chance that I would have been tempted to kill him myself. I would be hard pressed to find fault with any mom or dad who ends the life of a monster who harmed their kid. But the understandable rage of a grieving parent is not the same thing as calculated barbarity on the part of the government.

I am opposed to the death penalty for several reasons.

First, there is always a chance that the person being executed is innocent. A recent study purports that around 1 in 25 people sentenced to die for their crimes is actually innocent. In the past 45 years, 162  people convicted of capital offenses have been exonerated, sometimes after spending decades behind bars for crimes they did not commit. I am not OK with one innocent person being put to death. That is an error that cannot be corrected.

The death penalty disproportionately affects the poor, minorities, and the mentally ill. You are not likely to find a wealthy man strapped to a gurney and waiting for lethal injections if he has had an aggressive team of lawyers working on his behalf while billing upwards of $500 an hour. Regarding race, did you know that there have been 20 executions of a white defendant who killed a black victim but 288 executions when the roles are reversed? Or that studies of juries in multiple states show that jurors are three or four times more likely . . . or even more . . . to recommend the death penalty for a black defendant than they are for a white defendant who committed a similar crime? Those 162 exonerated individuals I mentioned earlier in this post? More than two-thirds of them are minorities. And, as I've stated before, Irick did despicable things. Of this there is no doubt. But before that, he had been damaged himself. He spent most of his childhood in a home for abused children and shared that the devil sometimes spoke to him. I share this not to garner sympathy for a child rapist, but instead to say that here is a man with lifelong and severe mental health problems. Capital punishment in this country is hardly an example of equal opportunity.

I also oppose the death penalty because of my faith and the teachings of Jesus. It's apparent that others of faith do not share my view, as around 70% of evangelical Christians support capital punishment. I'm not sure how murder by the government comports with those important words in red that are supposed to be our life directives, but I've been known to disagree with the stance of evangelicals before (see: Trump). Even if you are a Christian and believe the death of Irick last week to be a just one, I don't understand the inclination to celebrate. Our reaction, I think, instead should be somber and prayerful. I am thankful, once again, for Pope Francis, who spoke out just last week and stated that the death penalty is unacceptable in all instances, making him just a little more awesome.

One of the most stirring moments regarding faith and the death penalty happened three years ago in Charleston, South Carolina, as family members of those slain by Dylann Roof spoke to him just days after he unleashed a massacre inside their church. These amazing men and women looked at the person who killed their loved ones and shared that they forgave him and prayed for mercy for his soul. I have watched that encounter over and over again. Would I have the same forgiveness in my heart? Now that Roof has been sentenced to death, will those families high five with glee if his execution ever comes to pass? I doubt it. They are my role models.

Also, have you checked out the list of countries that still use the death penalty? For the most part, they aren't exactly among the "who's who" of shining stars in the "valuing life and human rights" category. Perhaps we should take a look around at the company we keep.

Finally, I offer a general question. What's the point? Killing Irick with a combination of chemicals injected into his veins is not going to make the next sick child rapist stop and think, "I need to change my ways before I end up like Irick." It's not going to bring back that beautiful girl. While I would dare not speak for a mom who has been through pain I cannot imagine, my guess is that his death does not end her suffering and her grief. You can say he did not deserve to live anymore. You can say that at least there is one fewer child molester using oxygen on our planet. And I get those sentiments. But I just don't think I ever will be comfortable letting the government make those decisions.

What are your thoughts on the death penalty? Do you have a belief system that guides your opinion? Where do you think I am right or wrong in all of this?