50 Reasons Why I Love America 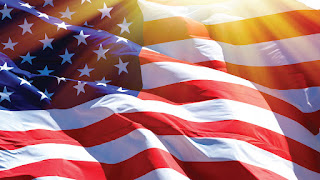 The crowd outside the Constitutional Convention asked an exiting Benjamin Franklin what kind of government the delegates inside the building were creating. He replied, "A republic, if you can keep it." We may be clinging to it by its fingertips, but I'm so thankful to celebrate our country's 242nd birthday today!

Several years ago, I wrote a blog post about how I struggled with the term "Proud to Be an American." Pride seemed like an odd feeling to have, when the amazing country in which I get to live is hardly an accomplishment on my part. Instead, I settled on the notion that I was HUMBLED to be an American. How fortunate am I that I was born at just the right longitude and latitude to enjoy the freedoms and the opportunities that come with being a citizen of the United States?

I need to confess something here. I want to get it out of the way so that I can focus on the good today. And I share it because I have spoken with others who are feeling the same way. Maybe some of you reading this can relate. Let's work through it together.

I look at the American flag and there are times when it makes me sad. This great land, this beautiful experiment, deserves better. It's hard to be proud of America or, more accurately, of American leadership, as it exists right now. We have a president who advocates ideas and priorities that run counter to American ideals, who denigrates the Constitution, and who is an embarrassing spokesman for our country instead of someone who effectively shares our values and our strength for good with the rest of the world.

Recent polls indicate I'm not alone, with pride in America at a record low and a majority of Americans believing that their own president does not value democratic institutions and traditions (including 25% of Republicans!). That's shocking, isn't it? More than 60% of our citizens do not think our leader holds dear the essential elements that make America work so beautifully!

My love for America does not change, even when I am dismayed by the temporary occupants in Washington, D.C. I believe in her ideals and the goodness of her people and I desperately want to continue to believe in her future. I know that her good will and her place of leadership on this globe can be restored. I want to celebrate her today!

With that in mind, I now share 50 things (in no particular order) that I love about the United States as we celebrate her 242nd birthday today. I hold to them tightly today and I will think of them when I look at the flag. There is no room for sadness today!

2. I went to church last weekend. The weekend before that, I did not. Either one is allowed.

3. My uterus did not prevent until just recently my right to drive a car.

5. voting . . . I've only missed one election (including federal, state, and local races) in 25 years of voting and it still gives me chills and butterflies every time.

8. The US Marine Corps War Memorial at night - literally takes my breath away.

10.  Capitalism - it's gotten a bad rap recently, but the drive to create something better than the other guy has resulted in some amazing research and products.

11. Ameer Abdullah - my biggest NFL crush (and I have several)

12. The Declaration of Independence - read it today if you haven't, even if it's for the 78th time. ". . . we mutually pledge to each other our Lives, our Fortunes, and our sacred Honor."

13. "America" by Simon and Garfunkel

14. The type of person who walks up the stairs of a burning tower

16. The Statue of Liberty and the words inscribed on it

20. cabins with hot tubs and mountain views in Gatlinburg

22. town hall meetings with members of the city council or school board

23. men and women much braver than me who enlist to defend our land

29. the fact that participants in hate marches are always way outnumbered by those standing up to oppose them.

31. Martin Luther King, Jr.'s "I've Been to the Mountaintop" speech

36. The call to "love your neighbor" is applied in towns across the country every day.

38. Deserts and mountain ranges and beaches and fertile farmland and marshes and frozen lakes - tell me another country that has it all!

39. The Articles of Confederation - we couldn't have done it without you, trial run!

41. Arlington National Cemetery - go there, stand there, and don't say a word

42. I wrote disparagingly about the president at the beginning of this post and I'm not worried about going to jail or being killed.

43. People use car hoods as rafts and walk miles through unforgiving desert because of the promise that our land brings to so many.

44. the sound the American flags that form a ring around the Washington Monument make on a windy day

46. The founders knew neither they nor the system they created was perfect, so they made sure to have a plan for amending in place - and we've only had to use it 27 times in nearly 250 years

47. In my life, I've been roommates with Christians and atheists and Jews and Muslims and Hindus and I've learned so much from all of them.

48. Little Women and Little House on the Prairie

49. a newspaper in Maryland that publishes an edition the day after five of its colleagues are murdered because free press will win

50. that we are an experiment and not a finished product; that the call to be "more perfect" means there always is work to be done; that our history is we have invited more people to participate over time; that the yearning of people around the world to be free continues to be the force that makes our nation better