The Shared Approach of Trump and DeNiro 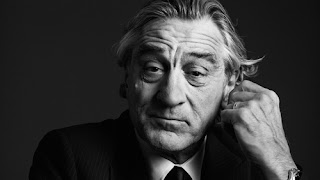 Trump likes to go to campaign rallies for an election he won over a year and a half ago, stand in front of an adoring crowd filled with people who think the exact same way he does, and yell absurd and inflammatory things like "Lock her up!" (again, you won . . . move on) and "Build that wall!" He knows these lines will be met with extended, raucous applause. He probably will get a standing ovation! He loves this type of reception. It affirms his worldview. It validates him.

DeNiro, apparently, likes to go to awards shows, stand in front of an adoring crowd filled with people who think the exact same way he does, and yell absurd and inflammatory things like "F*** Trump!" He knows this crude invitation will be met with extended, raucous applause (it was). He probably will get a standing ovation (he did).  He loves this type of reaction. It affirms his worldview. It validates him.

With Donald Trump and Robert DeNiro, you get two sides of the same coin. And two examples of the disintegration of respectful disagreement and discourse in our country. To condemn one and embrace the other seems disingenuous to me.

Yes, I know we should hold our leaders to a high standard and expect more dignified and respectful communication from the President of the United States than we do others in our country, be they accountants or attorneys or actors. But, when it comes to Trump, I believe we safely can conclude that ship sailed a long time ago. I would hope that most of us want our personal bar set higher than "Well, Trump says things as least as bad!"

And yes, DeNiro certainly has the right to say whatever he pleases. That's one of the many beautiful freedoms of the amazing republic in which we live. But what, I wonder, was he hoping to accomplish?

I imagine that DeNiro hopes for a "Blue Wave" in the midterm elections. I'm sure he does not want Trump to be reelected in 2020. Does he think that going with "F*** Trump!" is the right approach in working toward those goals?

By taking a public platform with an audience of millions and screaming "F*** Trump!", you have slammed the door on any real dialogue. No one will listen to reasoned arguments for opposing the Trump administration - and there are so many! - when "F*** Trump!" is your leadoff line. In fact, it's moments like the one DeNiro had at the Tony awards that will be used to draw more people who were on the fence about for whom to vote or perhaps not planning to vote at all right into the polling places to pull the levers (push the buttons? punch the chads?) for President Trump and his political allies.

DeNiro is not presenting an alternative, just anger. Anger and fear were the emotions that won the 2016 election. I long for something different . . . something better . . . for our country. She deserves it.

Agree or not with Michelle Obama's politics, I would hope that most people could endorse the appraoch she advocated concerning the tactics of the Trump team - "When they go low, we go high." It's the high road, taken by candidates of either political party and their advocates, that I long to see become more congested with traffic. Until then, we collectively are not who we could be as Americans. As humans. And tonight I think both Trump and DeNiro are part of this problem.
Posted by Sarah at 8:51 PM