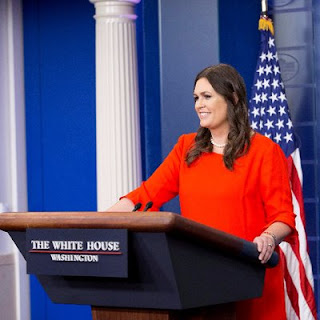 “When they go low, we go high.” – Michelle Obama

We certainly could use some more people in the public eye who choose the high road. But, it appears the advice of the former first lady is largely going unheeded as of late.

I will join the chorus of voices from across the political spectrum and share that I was disappointed in the comedic offering from Michelle Wolf at the recent White House Correspondents’ Dinner. But I think I was even more saddened by Trump critics who are laughing and writing that his administration is just getting what it deserves and what it dishes out on others all the time.

Is that really the bar we want to set? Trump does it so we can, too? If your goal for proper conduct is no better than a president who calls women “fat pigs” and “bimbos” and who assigns childish nicknames to political opponents and who uses Twitter no more responsibly than a middle schooler, than I am sorry you do not expect more of yourself.

I am not a fan of our current president. Nearly every day he does something new to make me wish he was not the head of our executive branch. His lack of policy knowledge is embarrassing, almost as much as his character. He has set back our country’s reputation and prominent standing for years to come. But, these misgivings do not want to make me call him “Cheeto-head” or resort to other playground behavior. I do not want him to be president, but I wish him no harm. I just want him to go away. The thought of demeaning him and those who work with him brings me no joy, and I certainly don’t want to set that example for my children.

I get that this annual event has taken on the tone of a roast. There is nothing wrong with poking fun at politicians and current events. I have enjoyed watching the correspondents' dinner for many years and appreciate the humor in it, even when such ribbing comes at another’s expense . . .  to an extent. Catching flack from pundits and comedians comes with the territory of being in politics. But last night, Ms. Wolf was purposefully mean. She mocked the appearance of several people in attendance. Is fat shaming not a thing as long as the target is a conservative? Are we rightfully angered when Trump mimics a disabled journalist but think it's hilarious when someone of a different political ideology is ridiculed for how he or she looks? Do you know who resorts to making fun of a person's hair or weight or skin when they really are upset about something entirely different but don’t know how to express it? The third graders in my son’s class.

And the personal attacks hardly started with the recent dinner and aren't owned by Ms. Wolf alone. Chelsea Handler disappointed me several months ago when she filmed a sketch with an actor pretending to be Sarah Huckabee Sanders in which Ms. Sanders’ weight and physical appearance were mocked. You cannot claim to be an advocate for women but then engage in such ugly and shallow hate. Call her out for being complicit in this administration. Share your thoughts on how she does not handle the press corps well. But why make fun of her make up and say that she looks like a man? You lose all credibility at that point. I have not watched Ms. Handler since because her message of female empowerment rings hollow to me now.

I still tell my children that most people are good. And, I do my best to point out evidence of that at a micro level at every possible opportunity. I’ve also had several conversations with friends recently in which we all agree that it is increasingly harder to hold onto that truth. Too often, we see the people on our televisions and in our communities default to the ugly and low road. We cry out against offensive behavior only when its target is someone we like. When the tables are turned, we embrace it and claim that it's what that person deserves. We cannot tell our kids that bullies are wrong but then stand up and applaud when we watch one in action.

You can say I'm blowing this all out of proportion - that it's a dinner that is known for its biting humor and that comedians should not censor their material no matter the audience or content. Fine. But my frustration goes beyond that one ballroom in the Hilton and extends to political talk shows and campus debates and social media platforms. There is so much hypocrisy when it comes to expectations about how those who disagree with us should behave and what is permissible for them to endure.

How about instead we stick to the high road and do our best not to delight in the mocking of others? What if we decided to choose kindness even if we contend that the "other side" rarely does? It's difficult, but it's certainly something for which I strive. And, while I should not presume to speak for one of my girl crushes, First Lady Michelle Obama, I believe that she would be favor of skipping the crude putdowns and moving forward on that overpass that sails over the trash and the muck.