Could I Play Tennis Today? (Subtitle - Why the Huge Growth in Travel Sports?) 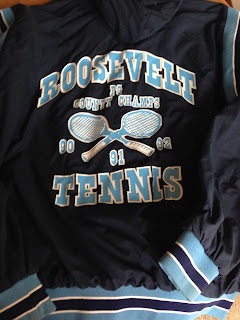 My high school tennis windbreaker. It still fits! (because windbreakers are large and forgiving)

In the summer of 1991, just prior to my junior year in high school, I decided I wanted to be on my high school's tennis team. This likely was prompted by a crush on Andre Agassi, but I don't really remember. And our team was good . . . county champions every year. (And unlike my kids' school system that has only four high schools in the county, I grew up in a county outside DC with twenty-one high schools.)

My history with organized sports to that point had been minimal. I took a few months of gymnastics at the local community center when I was eight years old, kicking the instructor when I swung around the uneven bars in a less than graceful fashion. And in seventh grade, I spent a short period of time on the track and field team of the local boys and girls' club. In that instance, my coach ignored those of us in whom he found no potential and made us run around the track without instruction for an hour while he focused his efforts on his prize athletes. I eventually got bold and asked for a shot at the 100-yard dash and I wanted to race the boys. I came in first place. I believe he was upset at being proven wrong, so he placed me in one long-distance race at my first (and last) meet without any guidance.

Despite this lack of athletic resume, I set my sights on tennis. I had a friend across the street a year older than me who was a really good tennis player. I asked him to help me. We spent four or five hours EVERY DAY that summer at the courts that were about a ten-minute bike ride from my house. Then, we would bike to 7-11 (or drive if I somehow had a parent's car that day) and get cherry Slurpees. And then I would settle in for the all-new episodes of Beverly Hills 90210 that aired that summer, which was a brilliant marketing move on the part of the fledging Fox Network.

Several months later, seventeen new girls showed up for tennis tryouts to join those already on the team from the previous year. After a week of drills and practice matches, I was one of the three girls who made the cut. Fewer than 20% of the girls who attempted to join the team were successful . . . those are some tough odds! I was so excited and proud that all of my hard work had paid off! I never rose to be one of the top players, but held my own as a part of a solid girls' doubles team. My participation as a varsity athlete joined with my other activities as first chair French horn in the wind ensemble, above average student in the math and science magnet program, officer with the Ecology Club (even gave up my Aqua Net for that one), and time spent with my friends and pretty serious boyfriend. It all made for a wonderful balance, with no one activity dominating every waking hour of my teenage life. I had no intention of playing in college, but it was great to have athletics be a part of my high school career.

I wonder what would happen if I was a sixteen-year-old girl trying out with the same circumstances in 2018. Would I have any shot of making the team?

These days, many of the kids around me are starting travel sports as young as six or seven years old. This was unheard of when I was growing up, unless I was completely oblivious. I didn't have any friends involved in such things. I don't think I even ever heard the term "travel team" until a few years ago.

Is it more common in the South than in the mid-Atlantic? I don't think so. I recently talked to a friend who is my age and who grew up in the South. He played football all through high school and went to college on an athletic scholarship. He never played travel ball and neither did any of his friends, regardless of what sports they played, and they had no trouble doing well with their high school teams.

Or is it that youth sports have changed this much nationwide since I was in school? I believe the answer here is yes. I have read multiple articles that attest to the rise of travel sports over the past twenty years. It's happening. And community/recreation leagues, sadly, are struggling as a result in many locations. But I can't find anyone who can tell me why. Can you help me? It's obviously parent-driven. So, why we are putting kids in more travel sports and at an increasingly younger age? (Maybe the broader question needs to be, "Why are we scheduling our kids with all sorts of activities more than ever before, not just sports?")

I know that Pete Sampras and Andre Agassi were in intense tennis programs before they were out of elementary school in the 1980s, but they were rare exceptions. Is it the case these days that most parents believe their kids are destined to be the next Jason Verlander or Peyton Manning or Lionel Messi (confession - I had to Google "famous soccer player")? Probably not . . . or at least I hope not! Or, at the very least, are they banking on college scholarships? The statistics bear out that neither of these future outcomes is likely to happen. So, what else is it?

I write this NOT to brag on my kids because I'm not super fond of doing that, but I think they are good athletes They have made the all-star teams in every season for any sport they have played. More importantly than that, they truly love to play. They read about their sports, they watch film of their sports, they talk A LOT about their sports. I believe they would be assets to any travel team of which they were a part and I contend any coach they have had would agree. They have passion and are very competitive, especially my girl.

Here is what they both want out of sports - they want to have fun and spend time with friends and they would LOVE to play for their high school teams (basketball and baseball/softball). I am all on board for all of these things and will wear their school colors and cheer with pride from the stands! But, am I denying them the opportunity to play for their school teams if they "only" do rec sports and I don't invest a good chunk of my paycheck and weekends in their practices and games? Am I preventing them from reaching their athletic potential? I am certain these are questions parents of my friends growing up never thought to ask. But I find myself asking them often now.

I will admit that I did relent and my daughter, who is twelve years old, is playing for a travel softball team for the first time this year. I thought it was time to give it a shot. In the interest of fairness, I probably won't let my son do the same until he is older as well (although now is asking to join a travel team because his sister gets to do it). She wants to play for her school team and, with rare exception, the girls who make that squad come to tryouts with travel ball experience and the coaches expect it. So, let's do it! I've been to a few tournaments now. She has a lot of fun and the other parents on her team are really nice (thankfully!), but I often look around and think, with the matching bags and labeled helmets and big trophies, "Well, this is all a bit much." Maybe I just need time to adjust. I'm new to this. It's not my native land, but I'm learning to embrace it.

I have a lot of friends whose kids are involved in travel sports and the whole family seems to love every minute of it. So, I write this post not in stark opposition or judgment but as someone who is just trying to understand. If you choose travel sports over rec options for your kids, why?

Is it out of necessity? I know there are some sports for which rec options just aren't available.

Is it to find a higher level of competition (which is the whole "chicken and the egg" problem because as more kids leave rec sports, the competition and opportunity to improve will continue to diminish on rec fields and courts)?

Or, do you prefer travel ball because you just think it's more fun?

What are your experiences? And why do you think travel sports have exploded so much?
Posted by Sarah at 7:08 PM