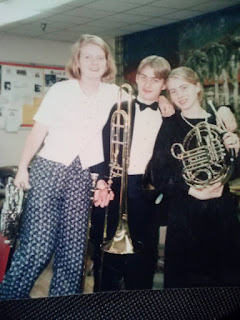 One of the few photos I have with my horn, circa 1995. I returned to my high school for alumni band and played with my siblings, who were still at the school.

I sold my French horn last night. That instrument had been mine for over twenty-five years. I walked onto my high school stage with it for wind ensemble and chamber orchestra concerts. I sat below that same stage as a musician in our school production of “Bye, Bye Birdie.” I took it to private lessons every week. I learned movements from gorgeous Mozart concertos. I played Christmas music on it as part of a brass quintet and won with it at ensemble competitions as part of a woodwind quintet. I dragged it across campus in college, convinced one arm permanently would be longer than the other. I took my Walkman out to my backyard, lay in the grass, and listened to soaring horns in Mahler and Dvorak and Saint-Saens and hoped I could reproduce such beauty on it.

I love the richness of the sound that comes from the bell of a French horn. I love the beauty of the instrument itself. I love how difficult it is to play well. I love that it can provide the background “oom pas” that are essential to keep the entire ensemble playing as one or it can demand attention when its notes rise over the clarinets or bassoons being played in front of it and take over a haunting melody.

Playing the French horn gave me a great feeling of accomplishment when I made first chair in Wind Ensemble my senior year. There were four bands and three orchestras at my very large high school with over a quarter of the student population participating in one or the other . . . to be the top horn in my school was a big deal for me. I also learned to deal with disappointment when I was not selected to participate in the school’s annual concerto concert (especially since my primary French horn rival had been featured the year before) and I did not earn a spot in All State band.

But for me, my French horn represented more than the music itself. While I was in an academic magnet program and played on the tennis team and was an active member of the Ecology Club and did other teenage stuff, most of my friendships and social life were connected to music.

If I wrote down a list of my ten closest friends in high school, or even twenty, almost all of them were in band or orchestra. While excellent young musicians, some of these same friends also were varsity athletes and civically involved, a well-rounded resume that I hope is still encouraged at high schools today.

My first kiss and then, a couple of years later, the first boy to whom I said “I love you” were both in the music program. My senior prom date? A friend from band. And, I tell you this . . . there were multiple band couples making out late at night while “Under the Bridge” by Red Hot Chili Peppers played on our charter bus coming back from a competition in Virginia.

Before the bell for first period, many mornings I switched out my horn for the piano and practiced with the jazz band in the band room. When I skipped World History or AP Calculus, it was often to hang out in the band room. I can’t remember why our director did not make us go back to class, but it worked for me. If I had plans to go out with friends after school? We would meet up in the band room.

The afternoons by the lake, the post-prom parties, the weekend slumber parties and crank calls to boys we liked, the taking over of Three Brothers Pizza at Beltway Plaza as we ate together before every concert . . . all with band people.

I have so many memories attached to the hours I spent in rehearsals and concerts and festivals. We were a family, with the expected favorites and rivalries and dysfunction that come with that territory. I almost quit my junior year in high school because of the "politics" of the chair seating decisions. I did stop playing my sophomore year in college when I decided that not being a music major and therefore not part of the inner band circle coupled with sitting near an ex-boyfriend who was in the trumpet section made it all too awkward (oh, the things that matter so much at age nineteen.)

My fellow band and orchestra members and I, we shared a love of making music as an ensemble and also of developing a individual craft that takes months and then years of repetitive practice (which I often didn't like) before progress is apparent and anything resembling excellency is achieved.

The reality now, though, is that my French horn has remained in its case in a closet for the better part of the last twenty years. I get it out once a while to show the kids and to let them try and create the embouchure needed for any decent sound to come out. I toyed with the idea of joining a community orchestra, just to have a reason to play again. It just didn’t happen. There wasn’t time. Or I didn’t make the time.

But here is a beautiful, new part of the story, as my horn moves to its next chapter. My French horn is now owned by a twelve-year-old girl who is about the same age I was when I started to play. I have known her since she was a toddler, thanks to preschool story time at the local library. While I lost touch with her family for several years, she now goes to the same middle school as my daughter. And you know what . . . she LOVES being in band and playing the French horn. Her eyes lit up when I handed her my horn and she prepared to play. She has been using a rental instrument for months and is so excited to have a horn of her own. She is in the county honors band and takes private lessons. Her friends are in band. She has found her home there. I gave her a hug and with tears in my eyes, I told her that I could not wait to attend a band performance and watch her walk out on stage holding the horn. I told her I hoped she would make countless memories and lifelong friendships because of time with music.

It was not easy making the decision to sell my horn. Part of me held onto the notion that I might play again someday. Part of me liked having the physical connection to so many great memories. Part of me just felt guilty because my parents had made such a big investment when they purchased it for me many years ago. Part of me wishes that my daughter wanted to play. (I’m still dropping hints to my son that he would make an excellent percussionist and assure him that, yes, he still could play basketball.) But, that difficulty is outweighed by knowing that I am helping to create similar memories for another young musician. I hope that in another quarter century, she is able to look back and smile in the same way I am as I write this post.

I still have my piano at home – the one on which my mom and grandma taught lessons. That is not going anywhere. I love being able to sit down and sight read for fifteen minutes when I need to lower blood pressure that had been raised by kids or work or when I just want to avoid folding laundry for a bit. I am determined that my kids still will understand music theory and history and be able to read the notes on the page and appreciate the stories the sounds create. Not having my French horn anymore doesn’t change what music means to me, but hopefully it will mean a whole lot to the girl who now has years ahead to see where it takes her.
Posted by Sarah at 4:02 PM