The Power of the Past 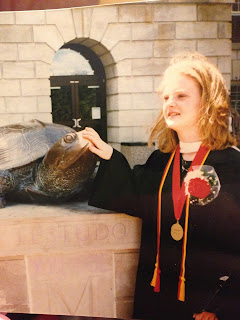 It's me graduating from college in poor lighting and wind! Not sure what I'm looking at . . . the future, I guess.

Over the holidays, I reunited with a close college friend I had not seen or spoken with in fifteen years. Prior to this, our last time being in the same room was at my wedding in August 2002, not long after I had attended the vows he exchanged with his lovely bride. I moved to Tennessee the next day and, through reasons as general as the busy and distracting nature of life and as specific as I was embarrassed by the state of my marriage and cut myself off from multiple friends so they wouldn't see how I was living, we lost touch. Until I tracked him down and then finally talked to him last month, I did not even know that he had children . . . two sons, one the same age as mine.

To admit this seems so odd given how close I was to this friend in college. We had long conversations in dorm rooms and I told him everything. We talked about our families, our relationships, politics, and religion. During the summer between our junior and senior year, we were together several times a week, often just the two of us. We both worked on campus and spent the evenings making dinner and watching television. I would buy the beer, as I had turned twenty-one and he was a year younger than me. He cooked a lot of things with pesto. It was comfortable and comforting to be with him.

This deep friendship continued for five years after we graduated, with nights of playing pool and watching sports and hanging out with groups of friends in a variety of ways that 20-somethings do. He was a treasured friend and I loved him dearly.

Fast forward to December 2017 and we are catching up over drinks at one of the same bars we frequented twenty years before. We are sharing stories about our families, laughing over college memories, and talking with an ease that would betray the fact that a decade and a half of successes and failures, heartaches and joys, had passed since our last conversation.

After an hour or two of chatting, we met up with my mom, brother, and kids at Comcast Center to watch a men's basketball game. This is when I was jolted out of my time warp. Here I was, sitting next to one of my best friends from college and watching the Terps on the court, as we had done dozens of times in the 1990s. But now, in the row in front of us, sat my two children. It was as if a timeline of my life had folded onto itself. (All the while my son, despite assurances from me that this person from my college years is a married man and our connection is quite platonic, threw sideway glances to remind him that the man of the house was watching . . . a chill that eased once a conversation about baseball was initiated.)

The next day, I had a weird aching in my gut. There were so many moments from half of my life ago that suddenly seemed fresh again - a time before I was married and divorced, before I had any clue what I wanted to do with my life (OK, still figuring that out), when I had so much free time and didn't realize or appreciate how fleeting that time of life would be. It made me reflect on the person I was then, and the roads I had taken to bring me to the person I am now. It made me wonder how so much of my life had passed so quickly. I also was comforted that the young woman I was then is not so different than who I am now, although certainly more confident and stronger. I didn't lose her along the way. I love that the people who I chose as my close friends then are proving still to be awesome people now (at least, in some instances, that's what Facebook would have me believe).

It's not that I want to go back to that time again. I love where I am - my children, my home, my job, my friends . . . all of it. But still, there was a pull to dwell a little longer and explore a time when so little of my life had been mapped. If you had told the 22-year-old me that in twenty years I would be a single mom living in Tennessee, I certainly would not have believed any part of that.

I have had other experiences in the past few years that have elicited a similar reaction.

This may seem silly, but I had a strong emotional reaction when, in a night filled with nostalgia, I saw the New Kids on the Block in concert for the first time in twenty-five years. That boy band dominated my middle school life. I sent them love letters and birthday presents. I planned to move to Boston for college just to be closer to them. Being surrounded by screaming women while Joe McIntyre (who has aged VERY well) sang "Please Don't Go, Girl" transported me back to being thirteen years old. And, as most of you likely will agree, there are a lot of weird and strong emotions tied into that age. For several days after that concert, I remembered some of those middle school insecurities and excitements again. I wasn't experiencing them in real time, but I could feel them acutely in my being.

When "Smells Like Teen Spirit" comes on my car radio during my drive home from work, I crank the volume to levels my 42-year-old self has no business attempting. I let my mind wander and soon I am peeling out of my high school parking lot with way too many friends crammed into my boyfriend's beat up Ford Escort. I am THERE. That high school time travel feels much different than the emotions stoked by middle school memories, but just as strong.

To be sure, my renewed college friendship is more consequential to me than a grunge song or Donnie Wahlberg. I am glad that our reunion at a bar in College Park, MD last month will be the start of "Awesome Friendship, Part Two" and we can rebuild our relationship on the much more grown-up and responsibility-filled lives that we have established in 2018. But all of my examples point to the truth that our connections to certain people or songs or objects have the power to stoke emotions or memories that can surprise us with the depth to which they still grab us.

What about you? Have you ever been surprised by how much an encounter with an old friend or a special song on the radio, or even a smell or a piece of clothing can cause such an intense reaction?
Posted by Sarah at 9:17 PM