The Note on My Fridge

Several years ago, my son came home from his summer day camp with a huge splinter going straight down the inside of his fingernail. It looked like a tree trunk on his little finger. I tried approaching him several times with tweezers, but each time he screamed in terror. I asked him if he would like one of the guys on our block to remove it instead, and he responded that he would. He would force himself to be brave for someone other than his mom. So, I gave him the choice of four names and he selected the man whom he trusted with this task. Our neighbor Tony calmly talked Ian through the process and the splinter was removed with few tears. Ian was so proud, and I was so thankful for Tony.

Now, my eight-year-old son is facing questions and social pressures and insecurities that are more complicated than removing a splinter. And there are times when he doesn't want to talk to his mom about it. So, much like we did with the splinter incident, my son and I created a list of trusted men in our family's village and we put their names on our refrigerator. When he has a problem at school or he is angry about something and he needs some "guy time" to talk through things, he can choose a name and I help him make that connection. Or, in some instances, I know my son needs that time and I make the request. Just last night, one of those guys put aside any other plans he had for the evening and played catch with my son because he had been having a rough week - the same investment of time and concern he has made in my son many times before.

I mentioned our "fridge list" to a friend yesterday and she said, "I think it's great that you allow so many people to pour love into your kids - that you are open to your children connecting with other adults." 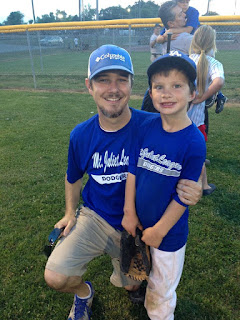 When you are a coach who cares enough to discipline and hug and check in about school and ask how you are treating your mom, you will make the fridge list!

The thing is, I can't imagine not letting others help me love and affirm and teach my children. The more I embrace the idea that we all belong to each other, the fuller our lives have become. But daily I am convicted that I am not doing enough in return.

It can be so easy to get overwhelmed by the fear masked as anger that we see all around us. To be troubled by our inability to communicate with one another and instead resort to yelling in ALL CAPS. By the lack of interest in being witness to another person's pain and triumphs or just their basic humanity. It can be tempting to hunker down and build physical or emotional walls to protect ourselves from people who don't look like us or sound like us or love like us or pray like us. Or who we simply don't like or who make us uncomfortable. I do it all too often.

But for me, the note on my fridge is my reminder to try harder - to make more connections, even when the topic of conversation is a difficult one. It's a reminder that doing something as simple as playing catch for a half hour makes a world of difference to a kid and his mom.

I often think back on a passage I read in Jimmy Carter's autobiography a couple of years ago. He was preparing to head out for a day of door-to-door evangelizing with one of his pastoral mentors. He found himself paralyzed when thinking about how he would be received and what if he didn't make a difference. His mentor responded, "You have two jobs. You are to love God and you are to love whoever happens to be standing right in front of you at that particular moment. That's it."

Whether you subscribe to the first part of that advice or not, what a remarkable difference we would see if we decided to love (or at least start with tolerate or respect as a fellow human being) the person right in front of us. If we decided that person was no more or no less worthy of love and compassion than us. What if we all were invested in the lives of others to the point that we found our names on a few "fridge lists" because people knew we would be there for them?

I don't have answers to the big questions. I'm not going to protest our current leadership. I have so much work to do on me first and that is where I feel I can make a difference. I want to really see each person who is standing right before me, no matter where I am standing, and claim him or her as one of value. I want to be "fridge list" material.
Posted by Sarah at 10:38 AM