Can You See Him?

I hereby acknowledge and thank the lovely Matthew McConaughey and his compelling portrayal of attorney Jake Brigance in A Time to Kill for this post. 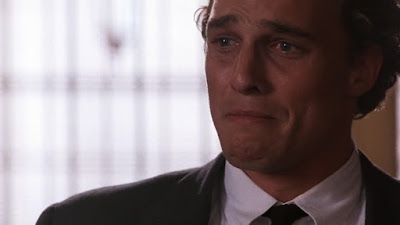 I want you to close your eyes. Picture President Obama is at a rally in California. He has screaming and adoring fans all around him. Can you see him there? Who does he think he is - some kind of rock star? There is no real reason for his speech tonight. The campaign is long over, but you couldn't tell by the way he is acting. Instead of pep rallies, he should be focusing on the administration of our country. But, he has a huge ego that needs to be stroked regularly so he purposefully makes these trips to be adored and feel good about himself. He doesn't really say anything of substance, but the people love him anyway. One woman even faints. He focuses on himself. He uses the word "I" a lot. It's sick how obsessed he is with himself. But, even though he rambles for over an hour and people applaud and cheer for his self-aggrandizing nonsense, President Obama doesn't even acknowledge the dead servicemen who had been pulled from the water that very day. It's quite evident that he has no respect for our military.

I want you to close your eyes again. Picture President Obama is speaking in front of a group of young men who have a long history of honoring their country and their leaders and the flag. Do you see him? I want you to really see him standing there. President Obama uses this opportunity to make fun of Senator John McCain and brag about how soundly he defeated him in the recent election. He goes on a tangent and starts talking about one of his wealthy friends in Chicago and how much he liked to party. Well, that's awkward. Does he not know who his audience is today? Then he maligns President Ronald Reagan by saying, "Hey, I bet that guy never cared enough to come here and speak to you guys, did he?" And then President Obama laughs as some of the young men in the crowd, who are holding large American flags, start to boo President Reagan for being unpatriotic and never caring enough to show up and speak to them. The president is laughing because he really doesn't like America and to hear its former leaders booed makes him happy.

I want you to close your eyes again. Picture President Obama on the golf course. Of course he is there. Again. Do you see him with that club in his hand? He spent so much time during his campaign telling us that President Bush had caused so many problems for our country that he would need to clean up. But yet, he has found time to go golfing twenty-one times in the first six months of his presidency. What a joke. We really should be calling him golfer-in-chief, am I right? But maybe we should be grateful that President Obama is hanging out at the golf course so much, because at least that way he isn't busy screwing up and betraying our nation with his dangerous agenda.

Now open your eyes. And picture that is President Trump. Because it is. (Trump golfed twenty-one times in the first six months of his presidency, as opposed to eleven for Obama)

I want you to close your eyes again. Picture President Obama sitting down for an interview with 60 Minutes. Do you see him there, in his nice suit and blue necktie? Look at him. He is asked about President Putin of Russia, a leader who makes his political opponents disappear and who isn't a super big fan of free speech. The interviewer wants to know if President Obama has a problem with the fact that Putin is a killer. Now keep those eyes closed and think about your reaction as President Obama says, "There are a lot of killers. We have a lot of killers. Well, do you think our country is so innocent?" You can't believe what you are hearing! Did President Obama just liken our country to one that is led by a former member of the KGB who would love to bring back the glory days of Communism? Does he hate our country that much? Well, it's not surprising. His wife did say a few years that she was proud of America for the first time in her adult life. So, of course, President Obama would think that little of our nation as well.

I want you to close your eyes again. Picture President Obama back when he was a candidate in the spring of 2008. He does not have much political experience but he thinks he is soooo smart and knows everything necessary to be the leader of the free world. He doesn't need to listen to advice from everyone. So cocky. He even has the nerve to say there are flaws in our Constitution - that our founding fathers didn't know what they were doing when they set up a system of electors to choose our president. He says that we should riot in the streets if someone wins the Electoral College and not the popular vote because that is not the way our country should work! He has no respect for the framers of our Constitution and the principles upon which this nation places its foundation. Either that, or maybe he isn't as much of a constitutional scholar as he claims to be.

Now open your eyes. And picture that is President Trump trashing a part of our Constitution. Because it was Trump. Until the Electoral College worked out for him . . . and then he loved it.

I want you to close your eyes one more time. Picture President Obama going on his "apology tour" and telling the rest of the world how America had done them wrong. Picture him at that speech in Cairo. Do you see him standing there? Well, of course he looks comfortable in front of that audience. He's a secret Muslim after all. He's probably working for ISIS. This is crazy. Next thing you know, he's probably going to bow to the leader of Saudi Arabia, one of the most oppressive, anti-woman, anti-gay, anti-freedom regimes in the world! Yep . . . there he goes! An American leader bowing to a murderous theocrat. I never thought I would see the day. What has happened to our country?

Now open your eyes. And picture that is President Trump bowing to Saudi King Salman. Because he did.

I didn't vote for President Obama. And I definitely didn't vote for President Trump. So, I'm not approaching this comparison at a staunch defender of the policies or presidencies of either man. (Although if given the choice, I would have President Obama back in the Oval Office in a second over the current administration.) My point, though, is that those who were screaming the loudest about how egotistical and dangerous and traitorous and nonchalant Obama was are those who are finding any excuse to defend the same behavior from Trump.

The speech in Phoenix last night was a gross display of that hypocrisy, prompting me to share the other examples that only begin to scratch the surface of how Obama would have been condemned for displaying the same behavior and flip-flops that Trump has offered us throughout his campaign and continues to show as president.

Go ahead and close your eyes one more time and picture Barack Obama saying he could shoot someone in midtown Manhattan and people would still love him or picture him reassuring a national audience that he has a large penis or picture him telling you that he can grab women's vaginas because of his position of power. Or close your eyes and remember how people reacted when he bombed Syria without Congressional approval or went on vacation with his family or signed a bunch of executive orders. This fun game could go on for hours . . . 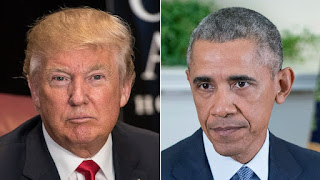