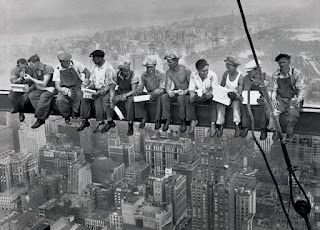 For as long as I can remember, I've had the tradition of reading the Declaration of Independence on the Fourth of July. This morning, I read it before having my first cup of coffee and I likely will read it again tonight. In the last several years, I've added watching America: The Story of Us to my annual activities. While I don't usually get to sit and watch it all day, I make sure the program is on my television screen. I'm looking at it right now. The documentary series is one of my favorite shows ever made. It has sparked dozens of great conversations with my kids.

So, here is my admission. For the first time in my life, this holiday has me feeling a bit sad. I'm concerned about where we are as a country. It's hard for me to be excited about the United States right now. I hate this feeling, because to be American is to be optimistic. So shame on me.

And, it's not just because of who is sitting in the Oval Office. Sure, that's a large part of it, because while I disagreed often with both President Bush and President Obama, and shared as much in many blog posts, this is the first time that I'm actually embarrassed by our president.

But it's more than that.

Our nation was built on the ideas of freedom and bold actions and risks. It was further crafted by debates that lasted for hours over the questions of who we wanted to be as Americans and families who took steps through the western wilderness and brilliant minds that developed railroads and dams and steel production and electricity. It was refined by the contributions of immigrants whose invitation to our shores is carved into the Statue of Liberty and orators who spoke out about injustices in our land and a compassion that offers care to those within our borders and beyond.

Do we still have people who would walk ten miles a day for six months, like those men, women, and children who settled the land that would become our western states? Would I do that with my kids? Institutionally or in our own families, do we encourage the hard work that is needed to build roads and bridges and farm our produce? Do we respect ideas and constructive debate and being thoughtful?

I know the answers to all these questions is "yes" on a micro level. I can point to plenty of individuals and groups who embody the work ethic and the perseverance and the embracing of diversity and new ideas that, to me, symbolize America.

But what about on a macro level? Collectively as Americans, can we still answer "yes" to these questions in 2017? Or, have we shifted to a nation that has become complacent in our successes and that is quick to attack instead of understand?

And when did we become OK with the campaigns from both major parties being built on anger and fear?

We are better than all of that. I know we are. Anger and fear and division run counter to the bravery and the boldness and the collective strength of all our parts that make this nation so amazing.

I'm not foolish or ungrateful. I know that I have rights and opportunities that many people around the world cannot even imagine. I am a woman who was allowed to go to school and work and marry (and then divorce) the person I wanted. My children go to sleep at night without bombs going off around them or on the cold floor of a refugee's tent. There is an entire aisle at each of the multiple grocery stores near me dedicated to cereal. I get to vote for my president and my members of Congress and my school board and judges. I get to write and speak unkind words when I do not like what these elected officials are doing without fear of persecution by my government (despite what the current head of the executive branch thinks he can do). I am forever humbled that the sheer luck of my birthplace has afforded me so much that I deserve no more than women born in Syria or Haiti.

And maybe I'm not supposed to be sharing these thoughts on Independence Day. You only should think good things about people and countries on their birthdays. On the other hand, perhaps this is the exact right day to share how I feel. Why? Because I love America and her founding ideals so much. I have a physical ache for how much I love this country. The Declaration of Independence, the Constitution, the Gettysburg Address, Kennedy's inaugural address . . . I could go on and on. They all give me chills. So, it's in America's defense and using my awesome First Amendment freedoms that I share how I'm feeling today. I live in a country in which I can type these words and not be sent to jail or be killed. I do not take that for granted. But I also KNOW we are better than how we treat each other and how we are perceived around the world today. And I'm still rooting for a return to the principles that make us so proud when we see that flag flying.

Today I celebrate our history. I celebrate our amazing founding documents and the ideals contained in them that we eventually saw fit to extend to all of our citizens. I celebrate the stories of entrepreneurship and artistry. I celebrate the men and women who keep us free through their sacrifices on the battlefield and their advocacy in the halls of our legislatures and on our streets. I celebrate the amazing people in our past, both heralded in textbooks and whose stories should be known but aren't, who have shaped our nation. I celebrate my freedom, and your freedom, to succeed and fail. And I celebrate that I know that the way I feel today will motivate me to do better where I can and to start those conversations and those ignitions of change right where I am.

Happy 241st birthday, America. May our best days always be ahead of us.
Posted by Sarah at 12:46 PM