Forty Days, My Son, and Faith 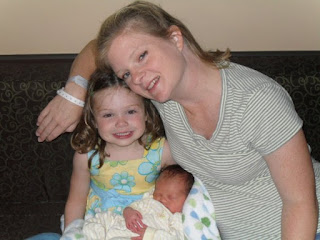 Sometimes my kids will accuse me of loving the other one more. I always reassure them that I love both of them so much and it amazes me how my heart continues to expand to love them more all the time. And while it is true that my love for one is not greater than what I feel for the other, I'm not going to deny that the relationships are different. Each relationship is bonded in unique ways, with those tethers being fiercely strong and devoted.

I can share with you the hundred ways in which I love my daughter and why our connection is so powerful. But today, as I prepare to celebrate my son's eighth birthday, I want to let you know how my son gave me strength and what he taught me about faith.

On July 23, 2009, I dropped off my three-year-old daughter at a music camp at a local church that she was attending for the week. I then took a blanket to the lake near our home, sat by the water, and cried. I was due to have my second child in a month and a half and I was newly separated from my then husband. There were so many questions. What would happen when I went into labor? Do I get my daughter to a friend's house and then drive to the hospital? Do I take my daughter to the hospital and then have a friend pick her up there? And what about after this baby was born? Would I have the energy to care for both of them? Does my daughter understand what is happening? Working as a freelance writer at the time, would I have an income steady enough to provide for my family? Will I always be sad? What do people think of me and my situation? How did this happen?

I closed my eyes and prayed. Although I had become a Christian several years prior, I'm not going to claim that prayer was my forte. I did not do it regularly and I never was convinced that I was doing it "right." But that morning, I told God that I was scared. I asked for His help. As I opened my eyes, a sprinkle of rain fell on me out of the clear blue sky and I felt such peace.

The next evening, I went into labor. In hindsight, the back pain I had been experiencing all day should have been a clue. With intense contractions now only a few minutes apart, there was no denying this kid was coming.

Here's the catch. My baby was not due until September 3. I was not ready. But here is also where it all gets amazing.

My daughter had just left for her first night ever away from me as I anticipated a fun night with friends at my home. I had six women on their way over to paint and decorate the nursery for this baby who we assumed was still at least a month away from making his or her arrival, with wine for them and water for me and pizza all around. But instead, I called the ones I could reach on cell phones and said, "Change of plans. The first one who gets here is driving me to the hospital."

I had no bag packed, so I gathered a towel, some socks, and my contact lens case, because that is what I thought I needed as I walked through the house shaking. Then I sat on my porch and waited. My friend Jill arrived first, helped me into her minivan, then called another friend whose husband is a cop and asked for advice if police should try to pull her over for speeding as we raced to the hospital. Luckily, we arrived VERY quickly but free of law enforcement encounters.

One of my closest friends and the woman whom I had asked to be by my side as I gave birth had just arrived back from her Florida vacation earlier that afternoon. Again, perfect timing. She met me at the hospital with tears in her eyes at the excitement of being my partner in all that was about to happen. Over the next couple of hours, the most amazing group of girlfriends a woman ever could hope to have left their own families at home and showed up at the hospital, holding vigil in the waiting room. I felt so loved and so safe.

Ian Charles Moore was born at 5:56am (I think?) on July 25, 2009, forty days before his due date and two inches shorter and more than a pound lighter than his sister at her birth. The neonatal nurses rushed him off soon after his delivery to check his lungs and the rest of his development, concerned that his early arrival had not allowed his body the time it needed before joining all of us on the outside. They soon returned and put him in my arms and said, "He's amazing. He is strong. He is ready to be here." I'm crying even now as I type those words.

Forty - it's a number of great significance in the Bible. Noah and his paired animals stayed on the ark for forty days. The Israelites were in the wilderness for forty years. Christ fasted for forty days ahead of His crucifixion and returned for forty days after His earthly death. The number is meant to represent a period of testing, and plays a similar role in the Koran and other writings of faith. In addition to testing, though, I also see the time as being evidence of God's provision through those tests.

Those who have known me for a long time know that I did not grow up believing in God. In fact, I spent much of my teens and twenties being quite argumentative with people of faith. All along, though, there were seeds being planted and I always secretly was curious about those who found solace in Scripture and their church families. It was after reading and traveling and listening to many sermons by a pastor in Nashville who remains one of the greatest and most authentic communicators I know, that I became a Christian.

Do I still question things? Yes. All the time. I wonder about what I see as God's personality inconsistencies in the Old and New Testaments. I cringe when a mom of a returning soldier says, "God was looking out for him and brought him home safely." So God totally ignored his buddy who was killed by an IED? I don't understand why I have had friends, young parents of children, die of cancer. I hesitate to align myself with my faith when I see others using the banner of Christianity to speak and act in ways that are counter to Christ's call to love. I believe in evolution. I think that some parables in the Bible are important stories that God uses to explain how we are to act instead of literal occurrences. I'm not content with the answer, "Well, there are just some things the human mind cannot understand this side of heaven." I see that sentence as a cop out from handling the hard stuff.

But I also KNOW how I felt that day on the lake when God comforted me. While this sounds selfish, I believe God knew I needed Ian to come into the world when he did. It was the fact that I had no choice but to get up and care for my young daughter and my newborn son that kept me from heading down a very dark place that summer. And despite being an exhausted single mom, I felt more peace in those early months as a family of three than I recall having at any other point in my adult life. In the months and years that have followed, I have seen countless examples of people being His hands and feet in such selfless and inspiring ways that have meant so much to my family. I have read the words in red and they speak to me about brotherhood and compassion and caring for the marginalized and acting out of love without exception. I have been a witness to others who bear joy and peace and comfort that is beyond what their circumstances should dictate.

I get that you may read all of this and discount the role of God in Ian's birth. All of the people who were right where they needed to be when no one was expecting his arrival could have been a case of great timing and coincidence. And what about when it doesn't work out that way? Because sometimes it doesn't. I understand. Every moment that one person attributes to God can be explained away by another who holds a different belief. I'm not here to convince you otherwise. But as I celebrate the birth of my son eight years ago, forty days early, I only can tell you what I feel and what is true in my heart. Looking at the face of that beautiful soul as he sleeps and thinking about all of the precious moments of love and comfort I have experienced because of him, my faith and God's provision is affirmed time and again.

Happy birthday, Ian! I love you more every day.
Posted by Sarah at 10:43 AM