I listened to a few moments of President Trump's (those are two words I have yet to say out loud together) announcement last night that he had authorized the bombing of air bases in Syria. It's the first time I've watched him since he was elected. I had to turn it off after less than a minute because it is so disheartening to realize that he is in charge of our nation's military and our foreign policy decisions. The man who has stated he doesn't need daily intelligence briefings because he's "like, a smart person" now gets to decide who we bomb (because he changed his previous position that Congress actually should be consulted about such things).

I'm not going to argue here whether or not the bombings were an appropriate response to the horrific use of sarin in a chemical attack against the Syrian people, including many children. Bashar al-Assad is a nasty individual and his atrocities are long and reprehensible. Many world leaders as well as politicians on both sides of the aisle in our country have spoken out with support for Trump's decision. I know Hillary Clinton would have bombed those same airbases if she was sitting in the Oval Office. But I just don't trust the man who is making the decisions for our country and his ability to navigate the consequences moving forward.

Back in September 2013, Trump had a very different opinion on whether or not we should respond to the horror in Syria with military action (and side note - I think that Syria is one of President Obama's greatest policy failures, with the "line in the sand" that somehow just disappeared): 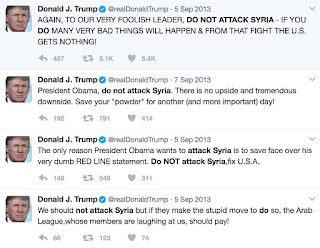 Now, I understand that people's positions on issues can change over time. For example, we saw both President Obama and Secretary Clinton's stance on gay marriage shift over the course of a decade. I hope we all are open to hearing other perspectives and perhaps adjusting our own opinions when we receive new information or better understand a persuasive argument. But our current president has changed the position he took just one week ago!

Our ambassador to the United Nations, Nikki Haley, said at the end of March that it no longer would be a priority of the United States to remove Assad from power. Our Secretary of State Rex Tillerson shared that the fate of Assad should be left to the Syrian people. This redirect seems to show the administration's desire to keeps our country's hands out of the Syrian conflict and "worry about our own," which was a popular campaign point. Go back a few more months, and Trump asserted during the second presidential debate that we should work with Russia and Syria (aka Putin and Assad) to defeat ISIS (which ran counter to the approach that his then-running mate Pence put forth in his own debate, because I guess they don't talk to each other).

So, what happened? From what I understand, he saw the video of the chemical weapon victims and was shocked, SHOCKED by what had taken place. He said it was horrible. You know what? I think it was horrible as well. My heart aches for the people of Syria, for the children who are no different than my own and who deserve the security that my family enjoys. But sadly, I wasn't shocked. Not really at all. It's par for the course for the murderous regime under which the Syrian people suffer. That is, when they aren't being slaughtered by ISIS or the Russians. (But please, let's keep them far away from our shores, right? I challenge you to look in the eyes of the man who lost his wife and twin babies in the gas attack this week and tell him you would have been opposed to letting his family into our country to escape their gruesome fate. #MAGA)

If our president actually read his intelligence briefings, maybe he wouldn't have been so surprised.

Our leaders should be disturbed by videos of children suffocating to death. On that point, the president and I agree. But Trump is a man who admits he does not read, who gets his information about global affairs from morning talk shows, and who likely has a less nuanced understanding of geopolitics than my seven-year-old son. He feels one way on a policy matter when it fits what he needs and then does a complete reversal not based on logic or new information but because of emotion or hurt feelings (ex. he hated the Electoral College and thought we should march in the streets against it and then suddenly, on November 8 of last year, he thought it was awesome -- his Twitter history will back me up on this one).

And let's go back to those 2013 tweets for a moment. There WAS video evidence of the chemical attack in the Ghouta region of Syria that summer. I remember watching it on the news and crying. You can still find the link to the news stories right here, and the BBC will warn you that the images are disturbing. And it was AFTER the media shared images of the 2013 war crimes that Trump tweeted his opposition to getting involved. Here's another "Trump tweet," just two weeks after the chemical weapons were dropped on August 21, 2013: 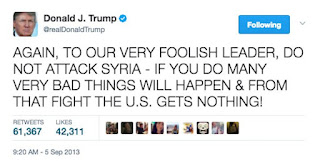 The acts of Assad were war crimes in 2013 and they continue to be in 2017. Why didn't the visual evidence bother him the first time? Why did he have a completely different reaction to the exact same atrocity? I guess The Apprentice was filming four years ago and Trump didn't get a chance to see the tiny victims in 2013. Surely then he would have refrained from GOING ALL CAPS and claiming that our president would be "FOOLISH" to attack Syria . . . for the very same reasons and with the same evidence that Trump is attacking that country now.

It's just all so troubling because every move that Trump makes seems to be borne out of a rash and emotional reaction, like when my child falls on the floor in anguish as I tell him he needs to brush his teeth. (Son, if you stop and think about it for a minute and read those cute cavity prevention briefings that the Tooth Fairy brought to your school, you would realize that brushing your teeth is good for you.) I do not see any foresight or long-term planning in the actions taken by the president, domestically or internationally.

Like this example, as a health care policy aside: "Hey, Freedom Caucus . . . even those you all are really conservative and some voters actually thought I might be . . . ha, ha, ha!! . . . you guys now suck because you don't like everything I do and I'm awesome so now I'm going to work with the Democrats and make sure you lose your next election."

Trump has no idea what he is doing and the consequences are "huuuger" than can be expressed.

With Russia and North Korea and terrorist groups like ISIS plaguing the security of our planet, we cannot afford a president who puts no thought into foreign policy and whose perspective suddenly can change based on a video that should have disgusted but not shocked any person with knowledge of the region. We now get to sit back and watch as he continues to make uninformed decisions about war and death as he goes. Whatever he fancies in that moment will do. Do you know what Trump's next steps are in Syria? You're not alone . . . neither does he.
Posted by Sarah at 11:44 AM