Teens on TV - Then and Now

Last weekend, I was flipping channels and landed on an episode of Full House. I watched as a classic story line unfolded. DJ's boyfriend Steve was elected prom king. Then DJ's face fell as Steve's ex-girlfriend was announced as his queen. Would standing side by side on that high school gymnasium stage reignite old passions and leave DJ standing alone? Or would Steve realize the other girl was an "ex" for a reason and DJ was the only one for him?

As the plot reached its climax, with Uncle Jesse's band providing well-placed background music, I could not help but think about two details that make this 1993 episode different than the offerings of the same genre that are available today. 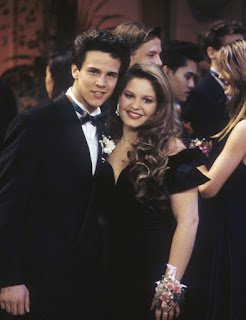 First, DJ Tanner dressed like most girls her age were dressing across America in 1993. In fact, her prom dress looks almost exactly like a dress I wore to homecoming in 1990 (because, apparently, I am more fashion forward than a fictional teenager in San Francisco). She looked like a typical 17-year-old kid and, as I also attended my senior prom in 1993, I probably watched that show and was able to see myself in DJ Tanner and her friends.

Second, if filmed in 2017, Candace Cameron probably would have been mocked on social media for being overweight. It breaks my heart that I had such a gut reaction when watching the show, but it shows how ridiculous and harmful our expectations have become. I mean, did you see all the internet cowards mocking the fierce and beautiful Lady Gaga after her halftime performance for supposedly having too much of a belly? It's absurd.

When I was growing up, I watched characters like Mallory Keaton on Family Ties, Vanessa Huxtable on The Cosby Show, Darlene Connor on Roseanne, Samantha Micelli on Who's the Boss?, and whoever the girl was on ALF (I just remember that I really liked the denim skirt she wore during the opening credits). They were relatable in their sweaters and jeans. They acted like the other kids and teenagers in my neighborhood. They worried about grades and friends and argued with their parents. They got cranky. They fought with their siblings. They wore all black when going through a season of not understanding who they are or where they fit in and then graduated to a lot of flannel (I'm looking at you, Darlene, and I feel you). 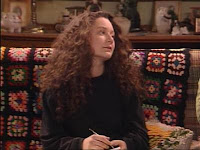 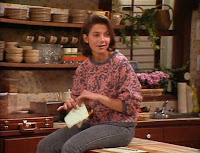 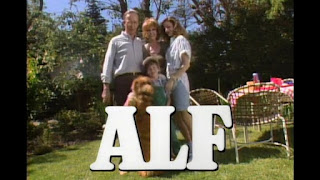 My daughter occasionally will watch some of the offerings on the Disney Channel that feature preteen and teenage girls. While some of these shows offer good messages about being smart and being engaged in your community (and most are just painful with bad writing and parental figures who either are absent or act like idiots . . . seriously, the parents in these shows have nothing to offer), I also tell her these girls do not seem very realistic to me. Every leading girl is dressed in professionally accessorized ensembles with make up application that bests my wedding day face.

I've seen the awesome middle school and high school kids waiting for the bus in my neighborhood every morning. They don't look like that. 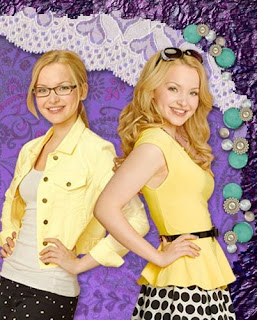 I know that body image issues have existed as long as we have had bodies. Even DJ Tanner passed out on the stairmaster in one episode of Full House after exercising too hard and not eating (this is my most Full House-filled post ever). Lisa Whelchel shared that she was often told by producers on The Facts of Life that she needed to lose weight. Tracy Gold battled anorexia for much of her time starring on Growing Pains. And I remember putting on my new pair of Lee jeans in 1984, when I was nine years old, and thinking they made my thighs look smaller. I realize that problems existed then. So, I don't THINK I'm wearing rose-colored glasses when comparing my childhood shows to what is available today. Or am I? Am I just caught in a wave of nostalgia?

And don't get me wrong -- girls can be anything they want and look any way they want. After all, we come in all sorts of healthy shapes and sizes and the media should portray that. If it brings a girl joy to embrace fashion and cosmetics, then go for it. (If she wants to try wearing eye shadow for the first time in the eighth grade and when people ask what is wrong with her face, she wants to tell them she fell and hit a door instead of admitting that the pink and purple shadow combo wasn't really working for her, then she should do that . . . I mean, this is just a hypothetical, of course . . . I have no knowledge of something like this actually happening . . . in 1988 . . . in Mrs. Algire's English class.) I just feel like the branding and the expectations of these young women is so different than when I was growing up. Everything is so polished all the time.

I'm sure that Netflix or Amazon Prime has some multiple-award-winning show that perfectly captures today's preteen. Or maybe there is even some network show that I'm just missing. Or maybe people just aren't making sitcoms much anymore at all, for any age group, so the opportunities to portray a variety of 12-17 year old girls is not there. I just want my daughter to have a couple of those shows like I did--that told stories for girls of her age in funny and real and awkward ways.


I would love to hear from other parents who grew up watching the same shows as me. Is the programming for kids and teens different now? Are there "realistic" portrayals of everyday life out there for viewing consumption? I am ready and willing to learn that I'm super wrong about my perceptions of today's TV.