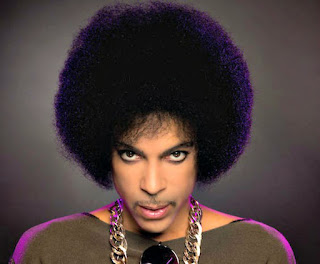 I started writing a blog post about Prince a couple of days after his death. But I just couldn't finish it. I couldn't put into words how much influence he had on my childhood and adolescence. I don't think I realized his impact until his death prompted my reflection. But his birthday is this week and the welcome increase in his music on the radio as a result has compelled me once again to try and complete my thoughts. I still don't feel like I've been able to capture what I've been feeling, but I've tried. So, here it is.

But I'm here to tell you, there's something else -- the after world
A world of never ending happiness
You can always see the sun, day or night

After hearing the news of Prince's death, I felt for several days as if I'd been punched in the stomach. I had a physical reaction to the news, in addition to the sadness that I would expect. The tweet that was widely circulated around social media explains it perfectly, and I shall paraphrase here -- I never knew Prince and therefore am not grieving a personal friend. However, upon reflection, I see now how much he helped me to learn about myself and I am grieving the loss of that teacher.

Prince has been one of my favorite artists for most of my life, and my childhood into my adulthood is peppered with casual memories for which he offers a soundtrack.

Watching my friend's older sister sing and dance in the car to "I Would Die 4 U" while we were stopped at a gas station on the way to Kings Dominion.

Discussing how amazing he looked on the cover of the Purple Rain album and listening to synopses from my friends who actually had seen the movie.

Walking home from school behind one of the really popular girls and listening to her sing "Raspberry Beret" with her friends.

Wearing my Batman t-shirt and listening to the Batman soundtrack over and over in 1989 during summer school gym class (which you had to take in the summer if you wanted room in your schedule for band at my magnet high school . . . and my French horn would not gather dust in the corner).

Sitting on my bed and listening to "Nothing Compares 2 U" after I broke up with my high school boyfriend.

Serenading my lab partner in twelfth grade microbiology with "Diamonds and Pearls" every day because it was one of his favorite songs and it would irritate him how much I would butcher it.

For some reason, "Kiss" was my go-to karaoke song for most of the late-1990s. I'm sorry, Prince (and Tom Jones) . . . I did not do it justice. I should have stuck with "All Cried Out" (singing both parts or finding a willing duet partner) by Lisa Lisa & Cult Jam.

And do you remember the Superbowl performance? In the pouring rain? You can keep your Bruno Mars and your Katy Perry. That entire production was amazing.

But then there are the more powerful, transformative experiences that I do not believe would have been the same without Prince offering guidance and accompaniment.

Prince was the catalyst for some of my earliest conversations about sex and sexuality. I sat in friends' basements or bedrooms at the age of nine and ten and discussed every lyric to songs like "Darling Nikki" and "Little Red Corvette." The women in these songs were powerful and confident. Prince not only respected them, but seemed to be in awe of them. When we talked about what exactly was happening in these songs, it didn't feel wrong or embarrassing to be curious about such things (it's actually more awkward to write about it now, thirty years later). We wanted to talk about what we thought we understood and listen to the same from others -- Prince gave us permission. My daughter is the same age now. What are her equivalent songs in 2016? I know she is starting to talk with her peers about sex, whispering about what each of them knows and trying to figure it all out, but I'm also convinced her background music isn't nearly as good.

Prince also was one of the early reasons I craved to learn more about social issues and world events. As a seven-year-old girl, when Prince sings that everyone has a bomb and we could all die any day, you take notice, even if it's in the context of a great party song. During the Cold War, with stories about those terrifying Soviets who lived on the other side of the wall, it sure felt like Prince's words could become a reality. Prince wrote lyrics to President Reagan and other world leaders in pleas to choose to peace over war as well as songs about domestic violence and race relations and poverty that spanned the duration of his career.

I also think about the times I turned to "Purple Rain" when I needed to hear that aching voice and searing guitar. I laid on my bed and listened to that amazing song at high volume when I felt alone in college and again fifteen years later when I was going through a divorce. I just turned off the lights in my room and let myself be surrounded by his music. I promise you that it is a rare occasion I get through that song without crying. (Side note -- the other piece of music that provokes the same reaction every time . . . Adagio for Strings by Samuel Barber. Ugh. Hurts in a wonderful way just thinking about it.)

Prince's favorite color was purple and he wore lace and velvet, but I don't think anyone ever questioned his masculinity. He broadened the perception of what that word should mean, at least for me. I remember taking a trip to San Diego with a girlfriend to visit another friend in grad school, staring at the poster of Prince in her bedroom (because apparently 23 years old was still young enough to hang posters on your wall), and having an extended conversation about how Prince was one of the most attractive men walking the planet. He just had that intangible something folded into brilliant music and a knowing smirk. I was drawn like a magnet to both his voice and his image. (The photo accompanying this blog post -- breathtaking!)

I guess, when it comes down to it, Prince's death brought back into clear focus so many life memories and I've now spent time bringing each one to the surface and experiencing those emotions fresh. He was there on the boombox I kept on the street while playing with friends after school. He was there to tell me about heartbreak before I experienced one. He sang about battling with family members, with the pain in his voice sharing that despite it all, he still loved them very much. He puts me right back into times in my life that were awkward and exciting and full of possibilities and confusing and painful and fun. He was at the top of my list of musicians who I hoped to see perform live one day. Or have dinner with. Or just exchange pleasantries with for thirty seconds on a sidewalk.