Confessions of a Quiet Sports Mom 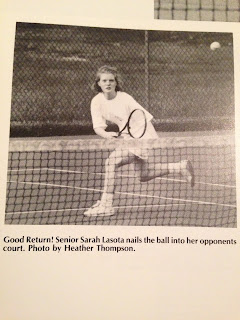 My yearbook offers rare proof that I was on the varsity tennis team in high school, since my parents didn't care enough to come and take any pictures . . . (I'm trying to ignore the typos in the caption.)
What you are about to read may be the most controversial and personal piece I have ever written. It’s about youth sports.


Sports were not a central part of our home growing up. My brother played baseball and basketball for a bit with the local boys and girls club, and I remember my mom dropping him off (not staying) at practice when he was my daughter’s age. I was on the high school tennis team, but I’m pretty sure my parents did not attend a single match. (Correct me if I’m wrong here, Mom.) That was not unusual, though, because I don’t recall more than two or three spectators at any of our matches . . . and we were the county champions every year, which is significant as there were around twenty high schools in my county! Parents just did not attend and it never occurred to me that they should. Was this unusual even in the early 1990s and the parent-free sports competitions at my school were an anomaly? Or have things changed that much in the past twenty-five years? I know that parents are more involved than ever in their children’s schooling and athletics and even playtime, so the latter is certainly possible. Whatever the case, I imagine that my own life experience has led to me being blindsided and unprepared in knowing how to operate as a sports parent.


I love watching my kids play ball. LOVE it. They enjoy being on the field and they both seem to have a decent level of athletic ability. But my experiences with the other adults in that environment during their first season of play have continued to affect how I watch their games and I’m not sure how to shake it.


When my son was four years old, a dad of another kid on his tee-ball team got in the face of the head coach, screaming profanities at him and actually threatening physical violence. The local police had to be called to escort this dad off the premises. What made this involved father so irate? He did not like the way that the coach was teaching the kids to stand at the plate and he insisted these young players would never succeed at a high level if the problem was not corrected immediately. Yes, apparently this is sufficient reason to threaten a brawl in front of a group of preschoolers.


That same year, my daughter had a bad call made against her during a playoff game. She clearly got a kid out at second base but the teenage referee called the runner safe. She was frustrated, but bad calls are going to happen and you have to learn to handle that. Two parents from our team started screaming from the bleachers, telling the high school student that he needs to get his shaggy hair out of his eyes and that he was awful. They would not stop. This vocal couple soon was ejected by the teenager (which I enjoyed), and then had to watch the rest of the game and the next game from the parking lot. Their daughter looked so embarrassed. When I spoke up about the behavior we were modeling for our kids, the coach said, “Well, I was upset about the call, too. And I don’t know why you aren’t mad, because the call was against your girl.” So, I was the bad parent for NOT being obnoxious.


Also in that season, I finally had to ask another mom to stop coaching my girl from the stands. I must admit -- I don’t get this constant shouting of “helpful reminders” while a kid is at the plate, beyond the supportive cheering. I’ve seen instances in which balls whizz right by players because they are looking at their parents yelling from the sidelines. (And then these parents get mad that the kid was not focused.) Coaches ask parents not to do this and my daughter has told me how distracting the constant noise from outside the fences can be. So, I finally had enough and said to the mom who had words for my daughter after every pitch, “Would you please just let my girl play?” To which I received the response, “Well, if you don’t like the rest of the parents supporting your kid, I guess that’s your right!”


As a result of these experiences, I have swung sharply in the direction of super quiet sports mom. My kids know where I am and often look for me when walking up to the plate or taking their place in the field. And I’m ready with a big smile and a thumbs up. But it is unusual that you hear my voice during a game other than an occasional “Yea!’ or “Good job!” when a play is over. On the rare occasion that I do catch myself being overly enthusiastic, I cringe and draw back. I know that the unruly and overbearing mom is in the minority, or at least I like to think so, but she also draws the most attention. I find that I go to great lengths, often to the point of stifling my own enjoyment of the game, to do the opposite. I’m not saying this is a good approach on my part . . . instead this is my confessional and search for advice.


I’ve asked my kids if they wish I would be louder during games. My girl said she doesn’t want to hear anything while on the field. Fair enough. My son said, “I just want to know that you are watching me every time.” And I do. As long as they are having fun and are happy with my presence, I’m good.
I’ve also become friends with a few of the parents who I have come to know over the seasons. I enjoy talking and laughing with them during games or running into them at the park if their kids are now on different teams. And there are some wonderful parents who help in the dugout and warm up with the kids before the games and make sure to compliment other kids on the team when they’ve had a good game. My kids’ lives have been impacted for the better by being part of a team and building lasting relationships with some of their coaches. But, my inability to understand and be around the hyper-involved parent is still a stumbling block for me and I’m frustrated by that. At this point, it’s not them, it’s me. I know that. I need to figure out how to get over it.


Many of you out there have kids who are involved in sports. What is your approach when you are at the ballfield (or rink or court or pool)? What is your advice for not getting hung up on or affected by the parents who are loud and critical throughout a game?


On a related note, were you involved in sports as a kid? If so, what was your experience like with your own parents and other parents on the team? How did their interaction (or lack of) with you during games affect your development and/or love of the sport, if at all?