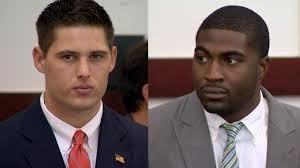 I don't know how much national attention this story has received, so I will begin with a quick summation. Earlier today, two former Vanderbilt football players (kicked off the team and subsequently expelled from school as soon as the allegations surfaced) were found guilty of aggravated rape and several other charges. Two of their teammates await trial for the same crimes.

In June 2013, an intoxicated Brandon Vandenburg carried an unconscious woman back to his dorm room and then invited several of his similarly drunk friends over. What happened next was horrible and it was documented. Photos and videos were sent by these four men to their friends across the country while the crime was still being committed. The woman has no recollection of the events of that night and only learned what happened several days later. The Nashville media has covered this case well and respectfully, so plenty of articles are available if you wish to learn more.

I have been disturbed by multiple aspects of the case:

1. The four football players directly involved in the rape. They claim that they were too drunk to be held accountable for their actions. They have little to no recollection of the events of that night. They never would have done the things that they did if they had been sober. Here's what I think. While I have no doubt that alcohol impaired their judgment, it did not change their core character. They were entitled athletes with no respect for women or the notion of consensual sexual activity and who believed they could get away with anything. That truth had to be embedded in the marginally functioning parts of their brains in order for them to take part in the events of that evening. They now will have at least fifteen years in prison to come to terms with the fact that their status on campus could not protect them from the consequences of their depravity.

2. The bystanders. The trial revealed that several students saw the half naked woman lying in a dorm hallway and did nothing to help. Vandenburg's roommate witnessed the four assailants with the victim, but turned over in his bed and pretended to be asleep. Vandenberg sent photos to high school friends in California . . . while the rape was still occurring. I don't understand. Yell! Call the police! Physically remove the perpetrators, or do your best to try! Do something. I find these men almost as disgusting as the rapists. The "bro code" of not interfering with another guy's sexual activity, the fear about getting involved, the callous lack of humanity -- all of it makes no sense to me. They are guilty, too.

3. Other rape victims. I know that these crimes made headlines in Nashville every day because the case involved Division I football players. The story also made news because the woman who was the victim of these crimes was brave enough and felt supported enough to come forward. We would be fools to think that this same kind of behavior doesn't occur on college campuses every weekend. And how many women blame themselves or worry about the backlash or believe the school and media will just protect the criminal (see Florida State)? I hope that one good result of this tragedy is that the strength of this female college student to sit in that courtroom every day, mere feet from those who assaulted her, in order for justice to be served will give voice to other women who have been victimized.

4. Coach James Franklin. When this story broke, Franklin's attitude with the media was arrogant and dismissive. He never once came out with forceful and angry language to condemn this behavior. He was not forthcoming about what he knew and when he knew it. He is not a leader. He's despicable. I hope he finds no success with his new job at Penn State. And, seriously, Penn State . . . this is the guy you chose to be at the helm of your team in an effort to make a fresh start from your own ugly headlines?

5.  Drinking. The defense attorneys tried to argue that Vanderbilt created a culture of excessive drinking and sexual promiscuity. The argument didn't work, and it shouldn't have. That being said, the goal that so many college students have to go out every weekend and get trashed to the point of blacking out is sad and dangerous. Why would you purposefully consume alcohol to a level at which you have little to no control over your actions and may not even remember them the next day? I know this has always been a part of college life; I've seen it and I'm sure my parents did before me. But even just twenty years later, it seems different somehow . . . more detached and more attention-seeking and more fueled by the inhumanity afforded by technology and the anonymity of social media in detailing exploits. I already talk to my children about alcohol. They know what it is and, generally speaking, what the negative consequences can be. My daughter is nine . . . she is not more than a couple of years away from being around kids who will start to experiment with drinking. I'm not waiting until then to start a conversation.

6. Teaching my daughter. I struggle here. Every time I think about talking to my daughter about making smart choices when it comes to alcohol and the people with whom she socializes, I worry that I'm dancing awfully close to blaming the victim. But I'm not. My daughter always will know that there is NO EXCUSE for anyone touching her without her consent. But I think it also is OK for her to know that she is smart and independent and capable of making decisions for herself. And those decisions need to include having people with you whom you trust to look out for your safety and best interests should you end up drinking in a way that compromises your own judgment or even just going somewhere unfamiliar. My daughter also, sadly, needs to know that making all of the right choices doesn't always matter. The victim in this case had been dating Vandenburg. She assumedly trusted him not to cheer on his friends as they raped her after a night of drinking. In that most awful of scenarios, my daughter must know that a woman's voice matters and that victims have a community and a justice system standing with them that will not endorse or ignore rape culture.

7. Teaching my son. I cannot imagine being the mother of one of those two men who were walked out of the courtroom and into custody today. My heart breaks for them. They had to sit for days and listen to graphic testimony and see photos and videos of their sons doing atrocious things. They learned about how their sons lied and asked others to lie in the days that followed. I don't have the answers as to what these moms could have done differently, if anything, to prevent their sons from doing these crimes. But I do know what I am instilling in my son, and I hope it makes a difference. You respect women. You intervene when you see someone hurting a woman. You help another person in need. Now, I don't expect a five year old to physically confront an attacker, of course, but I can have discussions with him now about the kind of young man I expect him to be so that hopefully when is eighteen, he will stand up and do the right thing.

The whole case is sad. I'm even a little sad for the two men convicted today. Don't get me wrong. I am pleased with the guilty verdicts and that they will have many deserved years in prison. But I'm sad about who they are and that they functioned every day viewing both women and themselves in the way that they did.

The victim in this case offered a powerful statement through her attorney once the trial ended, telling other women that they are not alone and they are not to blame. It is up to all of us to make sure those words ring true.
Posted by Sarah at 8:03 PM