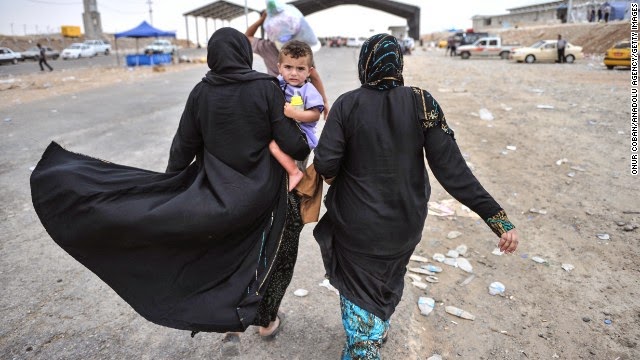 Today in Iraq, a 38-year-old woman gathered up what she could, tried to comfort her scared children and did her best to be convincing in her promise to keep them safe, and started walking with her family away from her home in Mosul. She is beginning a walk that will last for more than 50 miles, until she reaches the tents of the refugee camp that has been set up for thousands of others just like her. She is a doctor; her skills probably will be quite useful there. The Islamic State of Iraq and Syria (ISIS) is in charge of her neighborhood now. It's no place to be.

Today in Lebanon, a 38-year-old woman probably could share some words of advice with the mother just starting her journey in Iraq. Her husband is dead and she has been living with her four children in a tent for months now. At least bombs and chemical weapons are not falling around her like they were before she escaped the horrific fighting in Syria. But this is not how she imagined raising her family. Her middle-class life and afternoon chats with the neighbors have disappeared.

Today in Nigeria, a 38-year-old woman cries, just like she does every day, because her daughter was abducted two months ago and she still has no idea where the girl is. She knows who has her daughter and hundreds of other girls, though, and it's terrifying. Her girl just wanted to go to school, to talk about the books she loved to read. Some of the media spotlight and celebrity hash tags have disappeared, but this woman hasn't stopped thinking about her precious girl for one second.

Today in South Sudan, a 38-year-old woman grows desperate as she looks around at the cracked landscape and sees no fresh water and no food. She has lost her husband and two children to the violence of the ongoing civil war, and she has no idea how she is going to care for the three other little girls who look at her with hungry, fearful eyes. This woman may or may not have heard about another woman, about a decade her junior and also living in Sudan, who has been sentenced to hang because she refuses to renounce her Christian faith and profess belief in Islam. If the punishment is carried out, she will leave behind her husband, as well as a toddler son and infant daughter who are currently jailed with her.

Today in North Korea, a 38-year-old woman spends 16 hours a day moving around dirt in a labor camp. She might get to eat some rice tonight. She is there because a neighbor told authorities she had made fun of Dear Leader. She didn't! She wouldn't have dared! Her pleadings of innocence did not matter, though. Her son was brought to this same camp with her five years ago. Two months ago, the guards forced her to watch as they shot him.

The list of what is happening in the lives of 38-year-old women across the globe could go on and on and include every continent (What about Russia, Ukraine, Haiti, Venezuela, Chad, Yemen, Iran . . .). With the events unfolding in the Middle East, as terrorists march through cities in Iraq and claim power with little resistance from the standing army, I have been spending a lot of my time today thinking about these women, my fellow moms and professionals and writers and caretakers.

You know why? Because I am a 38-year-old woman and here are some of the problems I have faced this week: I was an hour late to work because I forgot to pack my daughter's swimsuit for day camp and had to return home to get it. I am fighting with my insurance company over its denial of some expensive tests that both my primary care physician and specialist assured me would be covered. I can't decide which type of tickets to buy for our trip to Disney World in October. My lower back hurts all the time, and I look like that slowly evolving man in science posters as I struggle to stand erect every morning. I ate too much ice cream and then felt guilty. I was too tired to get both kids into the car and drive over to the school board candidate forum this evening . . . and then I felt guilty again. Those are my problems.

It baffles me. My birth certificate lists Washington, D.C. as my hometown. Because of that . . . because I came into this world in a hospital built upon dirt that was designated as belonging to the United States . . . my life is radically different than if I claimed my origins at a different latitude and longitude. That one change and the existence that I know would be impossible. I think about that a lot.

This isn't to say that everything is awesome for women all of the time in the United States. There is discrimination and objectification. There are women who fear the men who walk into their homes every evening. There are women who don't have a home at all. There are women who cry themselves to sleep at night because they don't know how they are going to feed their children the next day. There are women facing terminal diagnoses who cannot understand why a country as advanced as ours has not found a cure. There are women who have lost their children to gun violence in a manner that will bring you to your knees in tears. I am not minimizing any of these very real struggles. But to live within the borders of a country in which you are considered chattel or your attraction to a man can get you stoned to death or your desire to go to college can get you whipped or you endure civil war after civil war or you never get any sense, any glimmer or inkling, or what it might be like to make your own decisions or just see your kids laugh and play in that carefree way that kids are supposed to be allowed to have . . . I cannot fathom what that must be like.

I do not feel guilty for being born under the circumstances I was given. I didn't do anything wrong. Instead, on days like today I am reminded to have gratitude. I could just as easily be the 38-year-old woman who is walking from her home in Iraq today to a tent 50 miles away with her children, those kids she loves so much it hurts, and who has known mostly civil war and then rule by terror and then more war for almost all of her life. At our cores, that woman and I have way more in common than what makes us different, But geography has dictated, at least to a large degree, that our circumstances have us now leading lives that, even in the age of social media and our global community, the other would struggle to comprehend.