Arizona, You've Got Me Thinking 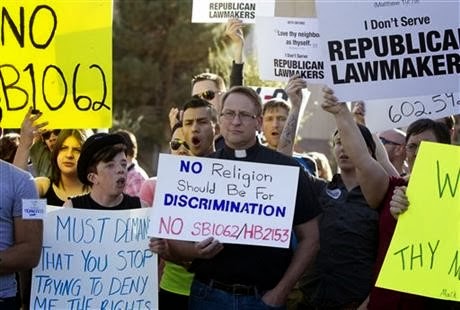 I've been struggling with an issue for the past several days, following the Arizona state legislature passing a bill allowing businesses to refuse service to gay customers for religious reasons. My state of Tennessee was considering similar legislation (which thankfully died a quiet death . . . for now) that had been nicknamed "turn the gays away" by its detractors. Several other states, including Georgia, Missouri and Kansas, have had other such measures under discussion.

The Arizona bill, in my opinion, was not designed to safeguard religious freedom. It was an opportunity for elected officials to attach their name to legislation that, unfortunately, they believe will win them favor with their constituents. They live in a state that already does not include sexual orientation as a protected class, so this law just reiterates with political punch the status quo in Arizona. Even three Republican state senators who voted for the bill wrote a letter several days later essentially saying, “Whoops, our bad. We were just trying to be good team players. But now that we really look at this bill, we realize it serves no real purpose and has the potential to be divisive. If we had it to do over again, we would have voted ‘no’.”

Taking recent events and widening the lens beyond whether or not a baker can be forced to make a cake for a gay wedding, which has been the focus of talk shows hosts across the country, the question that has (literally) kept me awake at night is this one -- In this free land of ours, how much freedom do individuals, specifically in this instance as owners of private businesses, have to be selective or discriminate or be racist or make horrible decisions (and being discriminatory and racist are prime examples of two such decisions) or simply be awful people? The nail salon I occasionally visit to treat myself to a pedicure has a sign by the cash register that states, “We can refuse anyone service.” But this isn’t really true. Should it be?

I know that discrimination against both employees and customers has been deemed unconstitutional based on the language of the Commerce Clause of Article I, the Equal Protection Clause and Due Protection Clause of the Fourteenth Amendment and Title VII of the Civil Right Act of 1964. I reread them all this week and appreciate them as cornerstones of civil rights law. I understand the language and how these important declarations provide access for groups in our country who previously had no such assurances. I am in awe of the brave men and women, most of them much younger than myself, who sat at lunch counters and refused to move to the back of the bus and marched across the South to change hearts and minds. That had to happen before any of the progress inside legislative chambers was possible. I tell my children about their efforts and am glad that the prejudice against which these activists were fighting makes no sense to them.

I also understand that government regulation into private business can be a good thing. Ten year olds cannot buy cigarettes. (Well, my friend and I used to bike to the gas station to buy them for her mom, but that probably wasn’t OK.) Drugs are tested to provide some level of assurance that ingesting them won’t kill you. The McDonalds in my neighborhood is required to accept American dollars just like the McDonalds in Florida or Vermont. Restaurants will be shut down if there are roaches crawling on the stove. I see where government has a role to play.

But here is where I need to admit something. There is part of me that just wishes business owners could decide who they will and will not serve. Put your cards on the table. If you hang a "whites only" sign on your door or say “Muslims aren’t welcome here” to a family who has entered your restaurant or tell a gay couple you are uncomfortable helping them purchase furniture for an apartment they share, I will never patronize your business. I'm glad to know that about you. I would not want to offer financial support to a racist or a sexist or to someone who does not share my views that consenting adults legally should be free to do pretty much whatever they want. I get that other people who have a different outlook than I do want to focus their consumer spending on the ways they see fit as well.

I know that even legal scholars will admit that the government’s right to intrude into decisions made by private businesses has often been based on stretched and tenuous arguments. But it seems that shopkeepers more often than not will reach the right conclusion on their own. The Arizona business community has come out strongly against the proposed law, which was vetoed by Governor Jan Brewer in part because of pressure from this group. Why? Because business owners know that endorsing any type of discrimination is bad for business. Arizona stood to lose billions of dollars in revenue because they were unnecessarily choosing to codify discrimination. Good.

When it comes to government institutions, like public schools and public transportation and access to social services, then absolutely protections against discrimination need to be in place. The government should not refuse services to anyone based on race, color, creed, gender, religious affiliation or sexual orientation. But what about the owner of Harry's Hardware Store in Indiana (any similarity to a real hardware store is completely coincidental and my use of Indiana is a random 1 in 50 chance)? What if he wishes it was not illegal for him to post a sign that only men are allowed inside his store? Why can’t I know how Harry really feels about me as a potential female customer before I give him money for a new hammer? I know this will never happen and I know that allowing business owners to discriminate fosters problems of segregation and distrust and possibly unequal access to essential goods and services. I would not want any of that to happen. But, I’m also concerned that we already do too much of that to one another regardless of what government has to say.

I am glad that the Arizona bill was vetoed by Governor Brewer. I’m sorry that the state felt the need to try it in the first place. Being able to make decisions concerning how you live your life and operate within your profession based on your religion or lack of religion is an important right in this country. But the Arizona statute, one that vaguely referred to “services” offered by a business and to the broad umbrella of possibilities offered by “religious reasons,” leaves way too much room for arbitrary discrimination. And, like I shared in earlier paragraphs, under the law people are not allowed to show those true colors and operate a business.

In my idealized, theoretical world, I would love for there to be no laws dictating how a business owner treats fellow humans. Perhaps I am just naïve or overestimating humanity or placing too much trust in the free market when I assume that a business owner who does declare his or her intention to discriminate will soon discover there are not enough customers coming through the doors to keep them open. Through conversations with several people who are much more versed on law and history than me, as I talked my co-workers and friends quite a bit trying to work out my thoughts on all of this, I understand that I cannot operate on the hope that communities will demand the fair and inclusive treatment of their fellow man (woman) that I would like. So, the efforts to find balance between liberty and the concessions that come with living in an organized society carry on.
Posted by Sarah at 12:44 PM