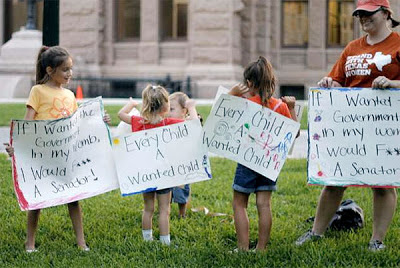 Photo taken from examiner.com. Admittedly not the bastion of high-brow journalism, but I researched and found the photo reprinted several other places and no evidence that it was photoshopped

I applaud civic activism in kids. I discuss current events, in an age-appropriate matter, with my daughter and son on a regular basis. They know who the president is, and some of the men who preceded him. We talk about how government is structured and what laws are. We discuss civil rights and voting and international relationships and our collective humanity. Being engaged in the world matters to me and I want it to matter to them. One of the most important things my mom ever said to me growing up was, "You are not allowed to say, 'I don't care'." Pretty good rule to live by.

I don't need my kids to agree with my political and social opinions (even though they are all correct). In fact, I hope they study the issues on their own and come back and challenge me. It will make for fantastic Thanksgiving conversations as they get older. Even if we never vote the same way or they someday march in D.C. for an issue on which I find myself completely opposed, I will respect their convictions if they come by them honestly and intellectually. (Well, I should stipulate that this appreciation for differences has its limits. If my son ever leads a rally promoting forced child labor or my daughter gives a speech about how genocide isn't so bad after all, I will know I have failed them as a parent . . . but I'm optimistic that neither of these things is going to happen.)

But, here's the thing. While I'm all for kids participating in the political process and holding up their own poster board signs, pictures like the one above are just sad. This photograph was taken during the showdown over abortion that took place recently in the Texas state legislature. Regardless of where you fall on the abortion issue, I would hope that you would find using this girl as a pawn to be offensive.

First of all, the sign contains the implication of a word that would not be included in any movie this girl would be allowed to see in a theater. But, more importantly and much more disturbing, the sign sexualizes this young girl. I imagine she can read. Did she not look at the sign and wonder why she might want to "f*** a senator"? The other signs the kids are holding . . . great! You've got my full support with that message. But who are you rallying to your side with the written exclamation from a girl who appears to be nine or ten years old that she will just march into the Capitol building and have sex with an elected official if she really wants the government to find a place in her uterus?

I'm hoping, and I imagine, that the woman who provided this girl with her lovely sign and those who yelled "Hail, Satan!" as politicians opposed to abortion gave speeches in the State House are part of the fringe. Both sides have got such folks. I'm not one to say, "The woman in this photo represents all pro-abortion activists!" But the photo struck me because it captured several ideas about which I'm passionate, both in its illustration of the potential for success and the actual utter failure. These ideas are: 1. Teach your children to care about people and issues; 2. Encourage your children to think for themselves; 3. Approach number 1 and number 2 with respect and kindness for self and others, both in the language that you choose and the actions that you take.

I hope that events like the one in which this girl participated excite her to pursue a life of civic engagement. That would be great. And when she is older, if she decides to make signs that reference a hypothetical sexual encounter with someone in power, then so be it. But for now, I just feel sorry for her.
Posted by Sarah at 8:49 PM